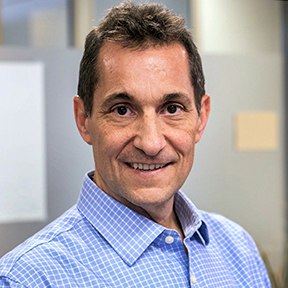 Mark provides operational and strategic leadership for the delivery of high-quality, patient-focused, integrated and sustainable healthcare within the Edmonton and North Zones, which together comprise the North Sector. He leads, manages and is accountable for the highest level of operational medical leadership and gives guidance to the Edmonton and North Zone Medical Directors.

Mark does this as a dyad partner with Deb Gordon, VP and Chief Health Operations Officer for the North Sector, and Mauro Chies, Vice President, Clinical Support Services (CSS), helping to oversee broad operations for North Sector and CSS, respectively.

An experienced healthcare leader with a lifelong passion and interest in the prevention of infectious diseases, Mark has worked with the former Capital Health and now Alberta Health Services for more than 20 years. Most recently, he served as the Senior Medical Director for Infection Prevention and Control (IP&C). He’s also held several IP&C leadership roles with AHS, and served as a key leader in AHS’ response to the H1N1 pandemic of 2009.

Past leadership roles include Chair of the Royal Alexandra Hospital Medical Staff Society and two terms as President of the Capital Region Medical Staff Association, as well as President of the Association of Medical Microbiology and Infectious Diseases of Canada, among numerous local and national duties. To prepare the next generation, Mark is a professor in the Department of Medicine at the University of Alberta, where he’s also an adjunct professor in Medical Microbiology and Immunology and the School of Public Health.

Mark’s diverse clinical experience includes his specialty practice in infectious diseases, based at the Royal Alexandra Hospital, as well as staff physician at the Edmonton Sexually Transmitted Diseases Centre and the Edmonton Institution for Women, a federal correctional facility.

A Calgary native, Mark graduated with his Doctor of Medicine from the University of Calgary in 1982. He achieved a Specialist Certificate in Internal Medicine and a Certificate of Special Competence in Infectious Diseases from the Royal College of Physicians and Surgeons of Canada in 1986 and 1989, respectively. He pursued further studies through a Postdoctoral Fellowship at the University of Alberta and the Stanford University School of Medicine between 1989 and 1993.

Twice nominated for an AHS Alberta Health Services President’s Excellence Award in 2016 (AHS Serious Communicable Disease Team) and 2015 (AHS Ebola Response Team), Mark has also been recognized with a Certificate of Meritorious Service (College of Physicians and Surgeons of Alberta) and has garnered many honours over his extensive career.

On a personal note, Mark and his wife, Debbi, have two children: a recently-married daughter, Jilli, who’s a California-based fashion designer, and a son, Micah, who’s a chef and rising star in the Edmonton culinary world.