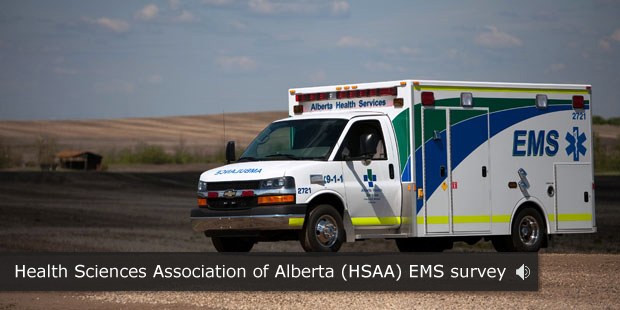 AHS always takes the concerns of staff extremely seriously, particularly our staff members working on the frontline. And that includes our dedicated paramedics and Emergency Medical Technicians.

In late September, the Health Sciences Association of Alberta (HSAA) released a staff engagement survey that suggested morale among frontline EMS workers is poor, and continuing to decline.

The survey said 81 percent of staff surveyed believe morale is lower today than it was when a similar survey was done two years ago. The survey was completed by 556 of the union’s 2,415 EMS members – 23 per cent.

AHS has done a lot of work in the past two years to improve engagement with staff, but it is clear that some staff still have concerns about how the EMS system operates. AHS will continue to take action to address those concerns.

In 2012, AHS began meeting directly with front line workers, to hear directly from them. As a result, a provincial staff engagement workforce team was established and Darren Sandbeck was appointed Chief Paramedic in April to provide additional leadership.

Today, EMS employees are providing direct input on new equipment and ambulance redesign to help create a better working environment and improve upon an uncompromised commitment to patient care.

In the latest quarterly survey, 96 percent of EMS patients said they were satisfied with the service and 97 percent agreed they felt safe in their care.

It’s also important to note that even in the face of rapid population growth across the province; Albertans continue to get their emergency medical treatment when and where they need it. Response times, reported on the AHS website, have remained steady over the past few years.

AHS has increased resources and supports for staff to equip them to do their jobs. These include:

We want our EMS system to be the best in the country, and believe we are well on the way to achieving that. We want to improve our response times and provide the safest and most appropriate response to Albertans, and we want our staff to feel valued for the work they do.