HomeHot TopicsRe: Get Serious: AHS could save billions by trimming bureaucracy – and still put patients first 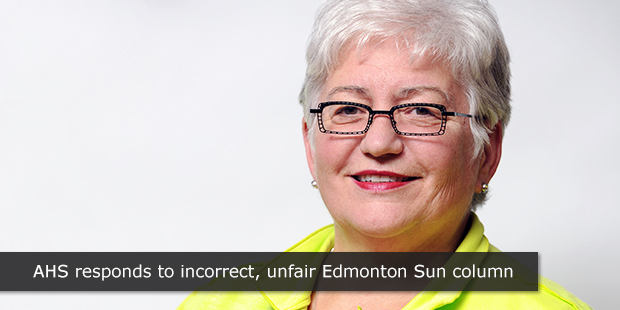 Re: Get Serious: AHS could save billions by trimming bureaucracy – and still put patients first

Alberta Health Services (AHS) periodically finds itself on the receiving end of criticism for its size and the fact 30 per cent of the provincial government’s annual operating budget is allocated to health care supports and services.

Typically, our critics claim AHS has top-heavy administration and wastes valuable taxpayer dollars on areas not directly benefiting patient care.Such was the case with a recent column by Lorne Gunter.

But the facts tell a different story.

According to the Canadian Institute for Health Information, Alberta is tied with British Columbia for lowest percentage of health care expenses spent on administration in Canada, at 3.6 per cent. When it comes to directing health dollars toward patient care, no province does more than Alberta.

Let’s look at another fact.

AHS does not spend $3 billion annually on administration; our total administration expenditure is about one-sixth that amount. Managers only make up three per cent of our AHS workforce – that includes the lowest-level manager right up to the executive leadership team, including the President and CEO.

AHS has not spent 70 per cent of its new funding on bureaucrats. In fact, in the current fiscal year to date, clinical-focused staff represents 90 per cent of workforce growth.

Our best-in-Canada ranking for administration costs has been achieved through cost containment measures that date back to the formation of AHS, when the organization saved hundreds of millions of dollars by consolidating corporate functions and reducing the number of senior management.

We have never stopped looking for ways to save administration costs that can be reinvested into patient care.

In the last two years, for instance, AHS has:

Reduced the number of vice president positions from 80 to 11.

Restructured our compensation for senior leadership and non-unionized staff based on the median of the public health care sector market. That means our leaders and staff are neither the highest paid in the country nor the lowest; our salaries fall somewhere in the middle.

The cost containment measures I recently announced represent AHS’ latest efforts to ensure the vast majority of taxpayer dollars we receive are spent on patient care and are only the beginning of the work we are doing.
Suggestions AHS budgets for patient care as an “afterthought” is, at best, an unfair assessment of what is occurring at every level of the organization as staff work to manage costs in the current fiscal environment with an absolute minimal impact on direct patient care.

AHS is the largest health care organization compared to its counterparts in other areas of the country. We are a provincial organization, and more than four million Albertans are receiving some of the finest health care supports and services available in Canada.

Health care in Alberta is good, often excellent and, in some areas, world-leading. And yes, in other areas there is room for us to improve.

You are more likely to survive a heart attack in Alberta than almost anywhere else in the country. People survive strokes in Alberta at a rate well above the national rate. Our researchers and clinicians develop approaches and protocols that are picked up internationally as the best practices available anywhere. And more than almost every other province in the country, Albertans rate their own perceived health as excellent or very good, while the number of Albertans satisfied with health care services continues to rise, according to a Health Quality Council of Alberta survey.

Are there areas we can improve? Of course there are. We need to address the issues facing our emergency departments; we need to address access to continuing care beds; and, we need improve our wait times for back surgeries – to name a few. But we’re working on making improvements in those areas.

I expect that over the next several months we will be talking more about health care spending. You will hear about initiatives we are taking to change the cost curve for health care expenditures.

And, as always, our first commitment will be to the highest quality, safe patient care across the organization and to the staff providing that care.

It’s an issue near and dear to all of us. And as I said recently, AHS does have work to do to ensure we spend each taxpayer dollar we receive appropriately. We do have to work at being more efficient and effective in how we use our human and financial resources.

But let’s get the facts right and have a constructive conversation.