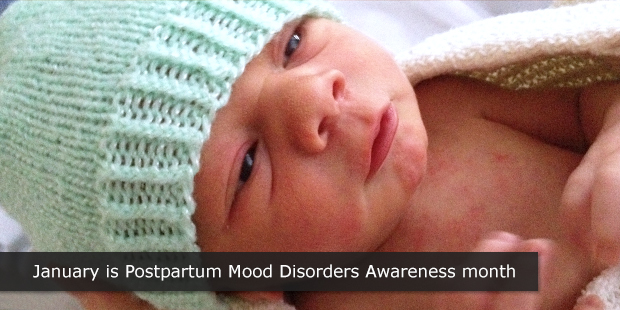 In November 2013 I gave birth to a healthy baby boy who weighed in at 6 lbs and 2 ozs. Though he was small in stature and size, we knew that he’d grow into his name – after all, we named him after his two grandfathers. What my husband and I didn’t know at that time was that the anxiety, insomnia and deteriorating mood I’d experienced during the last six weeks of my pregnancy were just the start of a long battle with near debilitating postpartum depression (PPD), panic disorder and, later, post traumatic stress disorder.

January is Postpartum Mood Disorders Awareness month, and it was during this time last year my mental health hit rock bottom. My first weeks and months of motherhood were marked by daily panic attacks, crippling insomnia that would see me go days on end without a wink of sleep, complete loss of appetite, frightening and obsessive thoughts that would race through by head uncontrollably, brain fog so thick it would take me over two hours to sit and write an email, and rage – rage that turned me into a woman I didn’t recognize.

I had no idea that my symptoms were part of a larger spectrum of postpartum mood disorders that can present with a wide variety of physical and mental symptoms. Though I was given information about PPD before I was sent home from hospital after delivery, I didn’t think that any of the criteria listed sounded like me. I wasn’t sad. I didn’t spend my days crying. I didn’t think I was a horrible mother or a failure. I showered. I took care of myself the best I could. But I was also in denial about how sick I really was.

While the causes of PPD and other postpartum mood disorders aren’t fully understood, there is help and treatment available and AHS has mental health professionals that specialize in working with women during the prenatal and postpartum period. Through a combination of medication, specific therapy methods and a rather intense exercise routine, I gradually began to see improvement.

The adjustment to motherhood can be difficult, and the fear and shame women experience when their thoughts and feelings don’t reflect the societal ideal of “natural”, blissful motherhood can prevent many from getting the help they need. It is estimated that up to 20% of women who have given birth will struggle with mood issues during the postpartum period and, of those who are ill, only 15% will seek treatment. If you’ve recently given birth and find yourself feeling worthless, sad, guilty or any of the other symptoms described here by the Canadian Mental Health Association, talk to your doctor and commit to getting the help you need – and deserve. You’re worth it.

Has your transition into motherhood been different than you expected? What kind of information and support could have helped you better prepare to become a parent?