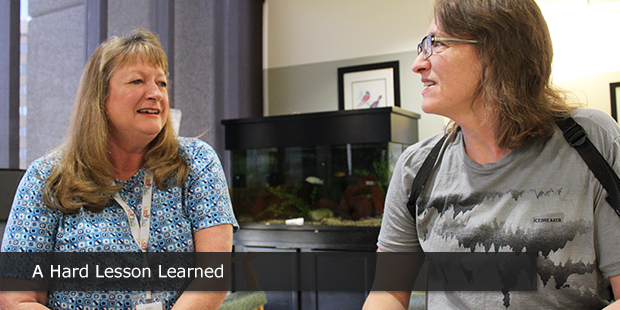 If I had only known about the symptoms of stroke – that strokes happen at all ages- I could have gotten to the hospital sooner. Life might be very different now.

I awoke on Sunday, November 23, 2003, 8:00 am.  I had been lying on my right side, and as I turned over, my right arm was numb and full of pins and needles.  I tried to ‘shake’ out the feeling, and started to feel unwell. I increasingly felt nauseous but still felt it was nothing serious.  After all, I was very healthy, active, a non-smoker, and decided it was a ‘bug’ of some sort.

Within an hour, I was feeling very ill and my leg was quite numb.  My neighbours called 9-1-1, and the ambulance took me to the Foothills Medical Centre.  I was totally paralyzed on my right side, had difficulty speaking and understanding what had happened.  I was told that I had a stroke.  I couldn’t understand how that could be possible…I thought strokes happened to elderly people.

In the days, weeks and months that followed, I re-learned the basics of life – speaking, walking, eating, and taking care of myself.   I longed for someone to talk with, someone who might have survived a stroke.  Can I have a decent life after stroke?  Will I be able to work again?  Drive?  Live on my own?  I had many questions, but no real answers from someone who had ‘been there’.

Years later, I returned to Foothills to volunteer on the stroke units, to visit with stroke patients and families to hopefully answer some of the same questions that I had.  The years as a volunteer resulted in the creation of the INSPIRES program (In-patient Support Program in Recovery from Stroke), with many peer supporters who have had a stroke, and sharing their experience, offering hope, compassion and understanding.

The hard lesson I learned is that strokes do not discriminate, and now am very conscious of the signs of stroke: