Former soldier Dene Graskie (a younger Dene pictured here with his son) says he is grateful he had Gita Ward, an Alberta Health Services social worker with a huge reservoir of toughness and compassion, battling alongside him.

Former soldier Dene Graskie says he has spent the last few years fighting “a different war” — this one with post-traumatic stress disorder (PTSD).

“It’s a lot worse when (the war) is inside your own head and it’s with yourself,” he says.

Graskie is grateful he had Gita Ward, an Alberta Health Services social worker with a huge reservoir of toughness and compassion, battling alongside him.

Their story is the subject of a new Because You Cared video from Alberta Health Services.

Graskie grew up in South Africa and joined its military at 17, dealing with the turbulence that rocked the country for more than a decade. He tried to put the past behind him when he and his son moved to Canada in 2005 but, despite living in a peaceful country, he was not at peace himself.

“(I had) serious bouts of feeling sad over the slightest thing, sometimes for no reason. But real sadness that would linger and hold,” says the 52-year-old Calgary steelworker.

He began distancing himself from his wife Donna and son Terrence, now 24. The fear of losing his family was enough to push Graskie into seeking help from his family doctor, who referred him to Ward at the South Health Campus.

According to MyHealth.Alberta, PTSD is a mental health condition brought on by experiencing or witnessing a traumatic event. Its symptoms include changes in behaviour, including isolation, relationship and work problems, depression and panic attacks. Most treatments for PTSD involve counselling and medication.

And although Graskie knew he needed counselling, it was not an easy process.

“It’s very difficult answering very, very personal questions to somebody you don’t know,” he says. “Things you put away for decades that you’ll never speak about again for the rest of your life. Now you must bring them out to the light.”

Nor was the process easy for Ward.

“When I was hearing Dene’s traumatic stories, on the inside, it was awful,” she says. “But I knew that Dene had to feel confident that I could hear these stories. So it was really important for me to try to regulate myself, keep myself calm and take care of myself after the session.”

“Part of his homework was he was going to have to put himself in situations that made him feel very uncomfortable,” says Ward, saying she would accompany Graskie to the grocery store and urge him to speak with strangers.

“I was horrified,” says Graskie. “I would greet people and ask just mundane questions; 99 per cent of people are pleasant and have no idea why you asked them a question.”

Graskie and Ward held their last session this spring after two years of counselling. He’s mending his relationships with his family, he’s working again, and he’s able to be around people without being overcome by fear.

“It’s been a different fight. A different war,” Graskie says of his battle with PTSD. He’s grateful to the woman who helped him win it.

“Gita gave a damn. My life was saved. My life was spared. ‘Thank you,’ is very small in words, but the meaning in my world is vast.”

The Because You Cared video series provides a way for Albertans to say thank you to AHS staff who make a significant difference in patients' lives. Watch fellow Albertans thank the people who helped them in a time of need. 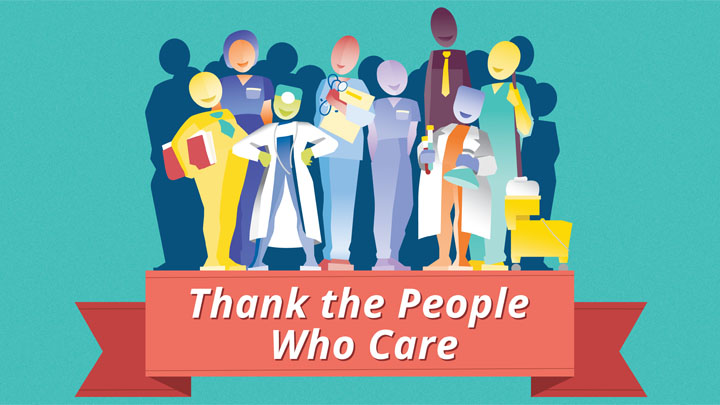