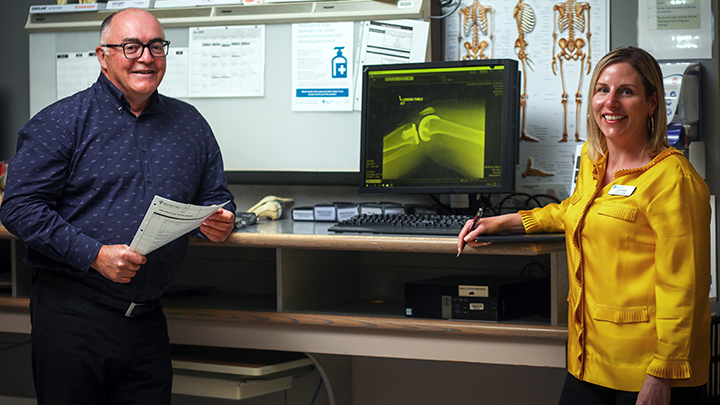 The accolade comes from Choosing Wisely Canada, a national body based in Toronto that advocates for reducing or eliminating tests and treatments that aren’t supported by clinical evidence.

“Clinicians in Calgary have for some time supported many of the recommendations laid out by Choosing Wisely Canada,” says Dr. Kelley De Souza, an orthopedic surgeon who, together with Carmella Steinke, Executive Director, Integrated Quality Management, Calgary Zone, led the Calgary application for the recognition.

“Unnecessary testing can be costly in terms of time and resources spent, can lead to false positives and more testing, and can even expose patients to unnecessary risk,” Dr. De Souza says.

Some estimates suggest that as much as 30 per cent of testing done in hospitals doesn’t necessarily lead to any value for patient care.

Among participating hospitals nationally, only three in Ontario have achieved the top tier, Level 3, and only two others have achieved Level 2. The Royal Alexandra Hospital in Edmonton sits at Level 1, the only other Alberta hospital currently recognized by Choosing Wisely.

“The approach we took in the Calgary Zone starting about a year ago was to survey 55 clinical groups to find out which of the 300 or so Choosing Wisely recommendations they had already applied to their clinical work,” Steinke says.

“From those results we found that we were already meeting the requirements Choosing Wisely set out for Level 1 designation, and we were also able to identify three specific quality improvement projects that could be recognized for Level 2.”

There are five requirements for Level 1, including discontinuations such as removing the “daily lab” options from order sets, removing folate testing (for measuring Vitamin B-9 levels) from a hospital’s ordering systems, and discontinuing routine chest X-rays in the ICU — a practice that ended in the Calgary Zone many years ago.

For Level 2 designation, hospitals are required to use a quality-improvement methodology, meaning they must collect baseline data, apply a defined intervention, and then after the intervention collect data showing change.

The three Calgary Zone areas of focus in Level 2 were:

“Reducing unnecessary tests and procedures isn’t just a benefit to patients, it also saves the health system financial costs, the time it takes to perform the tests, as well as staffing resources — all of which can be directed to the benefit of other patients.”

Steinke and De Souza say current efforts are now being directed at getting Level 1 and 2 recognition for the Alberta Children’s Hospital, which as a pediatric facility has its own unique areas of improvement focus.

Level 3 is on the horizon for Calgary’s other hospitals, with an application expected to go forward to Choosing Wisely by the end of the year. “For now we’ll pause and enjoy the Level 2 recognition,” De Souza says.