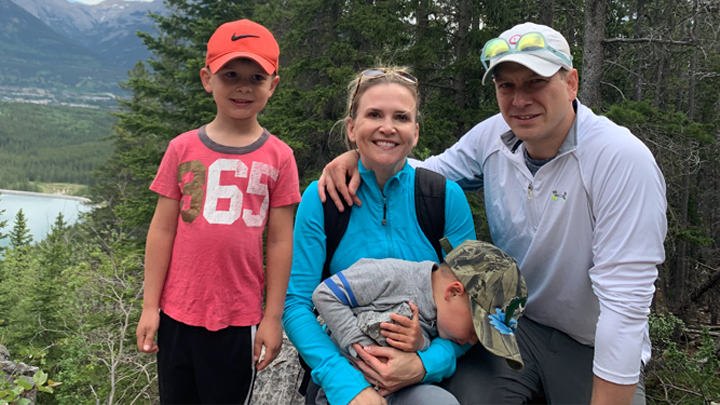 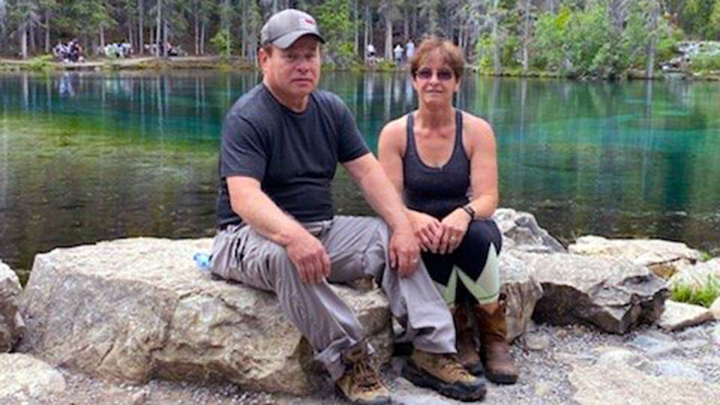 Darrell Parker and his wife Shirley take a break at Grassi Lakes near Canmore. Hours after this photo was taken, Darrell suffered a heart attack near the parking lot. Photo Credit: Supplied

Cardiac surgeon saves man’s life twice — once on the trail, again in the operating room

What started out as a pleasant hike for Corey Adams and Darrell Parker turned out to be more than just a walk in the woods. It would mark the beginning of a special bond between two random strangers whose paths would cross, first on the trail and then again in the operating room.

On June 20, Adams, his wife Jennifer and their two young boys went on their first hike at Grassi Lake Trail near Canmore. Also on that hike for the first time was Darrell Parker with his wife, son and daughter-in-law. As the Adams were driving away from the trailhead at the end of the day, traffic stopped and someone yelled that a man was unconscious and turning blue. The couple jumped out of their vehicle to see if they could help.

Just off the trail lay Parker, unconscious after having a heart attack. Another hiker had just started cardiopulmonary resuscitation (CPR), but fortunately for Parker, the young couple who rushed over to help were both physicians — one a cardiac surgeon, no less. The Adams assisted until firefighters and paramedics arrived.

“Collectively, several of us began a coordinated resuscitation. As a cardiac surgeon I work daily with teams who are experts at reviving patients,” says Adams. “But it was truly special to work in the field with paramedics, firemen and my wife to respond to this emergency.

“I really feel the teamwork of this group saved Darrell’s life. It’s an example of knowing the importance of CPR — and remaining calm.”

“We couldn’t believe our luck. The same doctor who happened to be on the trail that day, at the same time Darrell had his heart attack, was also going to be our surgeon,” says Shirley Parker, Darrell’s wife. “It was amazing.”

Originally, the Parkers had travelled to Canmore from Paradise Hill, Sask., just across the Alberta border, for a hiking trip with their son, Travis, and his wife, Seanna.

“I work in the oilfield, I’m very active and have always considered myself very healthy,” says Parker. “I had no idea what poor condition my heart was in.”

He underwent five bypasses to improve blood flow to his heart, nine days after his heart attack.

“This experience has really shown me how important it is for people to learn CPR. I realize I had an expert start my heart beating again, but not everyone is going to have a heart surgeon nearby.”

According to the Canadian Heart and Stroke Foundation, there are nearly 60,000 hospitalizations a year for heart attacks in Canada. Thankfully, Parker is one of the lucky ones who make it home.

He’s looking forward to returning to work in about three months and plans to start walking regularly — and maybe even go hiking again.

Meanwhile, Adams says his family is looking forward to many more trips to the mountains — but it is likely going to be their very first Alberta hike, at Grassi Lakes Trail, that’s talked about and remembered the longest.

“Without question this event will be a highlight of my career,” he says.

“As healthcare members, we often take some of the things we do as just part of the job. But after talking with Darrell and his family, it stresses the important role that we play in people's lives.”