When the heat's on, a cool sip of kindness helps 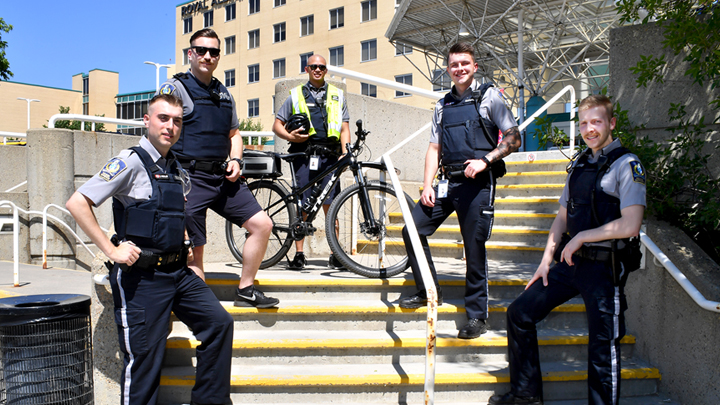 EDMONTON — During a heat wave, drinking water is more important than ever, and members of the Royal Alexandra Hospital (RAH) Protective Services team are lending a helping hand to ensure those most vulnerable stay hydrated.

Inspired by their time as volunteers for the Bear Clan Patrol — a community-based initiative offering basic necessities in an approachable and supportive way — five peace officers at the RAH have adopted the patrol’s mandate to foster community respect and compassion as they hand out water to individuals they meet while on patrol during work hours.

“I began volunteering in November when the Winnipeg-based initiative expanded to Edmonton, and I learned they would be patrolling an area near the RAH,” says peace officer Kale Trylinski. “We see a lot of the same faces in and around the hospital, and I was attracted to the opportunity to give back to the community in a less enforcement, more outreach experience.”

When he saw the late June forecast for record high temperatures, Vincent Oller bought water to hand out during his weekend shift.

“I know that the uniform can be intimidating for some people, but once I was able to show I was concerned about their well-being and offered free water, it was nice to see individuals warming up to their interaction with me,” says Oller.

The Royal Alexandra Hospital Foundation has since stepped up to help provide 1,000 bottles of water for patient areas throughout the hospital, including to Protective Services, to distribute to those in need.

As an officer on patrol at the RAH, Daniel Ahnert found it rewarding to have the opportunity to bring his experience with the Bear Clan Patrol to help provide a sense of safety, solidarity and belonging to both its members and the community at large.

“When we’re volunteering out of uniform, we appear non-threatening,” adds Ahnert. “My hope is that by showing compassion through something as simple as sharing water, it makes us more approachable and people realize we really do want to help our community.”