It’s something you need to do 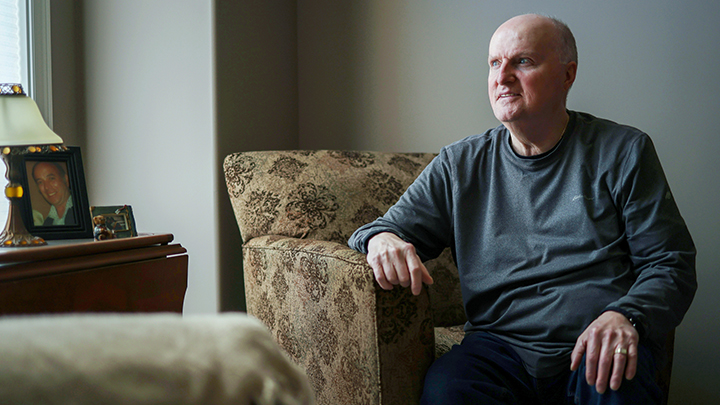 D’Arcy Duquette was 57 when he was diagnosed with colorectal cancer. He had no symptoms and, at the time, was very active. His life-saving diagnosis came after his doctor recommended an easy, at-home Fecal Immunochemical Test (FIT) during his annual checkup. It’s recommended that Albertans between the ages of 50 and 74 get screened, even if they feel healthy.

“Guys think they’re invincible. We think nothing will ever happen to us,” says D’Arcy Duquette.

But sometimes things do happen. The Calgarian was 57 when he was diagnosed with colorectal cancer. He had no symptoms and, at the time, was very active, playing hockey three times a week.

His doctor suggested a Fecal Immunochemical Test (FIT) during his annual physical. FIT is an easy at-home test used to screen for colorectal cancer. It looks for blood in your poop that you can’t see.

When the test came back positive, Duquette was referred for a colonoscopy, an exam that looks at the inside lining of the colon and rectum. It revealed a 10-centimetre cancerous mass. He had surgery to remove the mass, followed by two subsequent surgeries and chemotherapy for other cancers caused by the spread of the cancer in his colon.

“It’s important to remember that screening is for people who don’t have symptoms. If you’re between the ages of 50 and 74, you should get screened, even if you feel healthy.”

Seven years later, Duquette says he’s still only at about 25 per cent of his original strength and remains unable to return to his job.

“I don’t get to do what I used to — but I still get to be here. You get a new appreciation for life,” he says. “I get to hang out with my family and friends.”

Duquette would like to share a piece of advice for people who are hesitant about having a FIT test.

Here in Alberta, you now have two easy ways to get a free FIT kit. You can talk to your doctor to get a form to take to a lab. Or, you can order one online or by calling AHS Screening Programs (1-866-727-3926 toll-free) and have it mailed to you.

Once the test is complete, drop it off at a lab. You’ll receive your results in the mail within a few weeks. You may also get a call to discuss the results with your doctor.