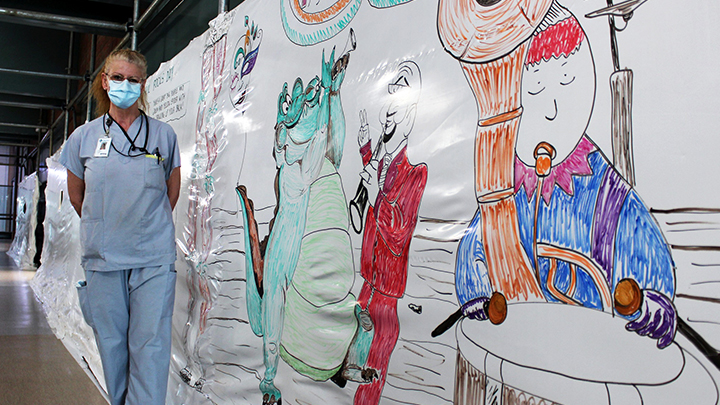 Porter Laurie Litchfield is quick to recognize the Mardi Gras section of her mural as her best work. Photo by Patrick Burles.

LETHBRIDGE — The openness you feel as you walk into the building is one of the standout features of Chinook Regional Hospital (CRH). Welcome sunshine pours into the atrium through large windows and skylights, with glass-walled corridors overhead.

Things got pretty dull, however, for patients and staff when a corridor had to be completely covered with white protective plastic sheets as a safety precaution during the replacement of the skylights last November.

But for Laurie Litchfield, a retired nurse who’s now a patient service attendant and porter at CRH, it presented an opportunity to bring some cheer to those around her.

“People were still kind of down because of COVID, and after a couple of weeks of seeing this blank wall, I thought it was just too big of a canvas to ignore — maybe I could do something for Christmas,” Litchfield says of her initial inspiration to paint a mural.

“After that, people started asking, ‘What are you going to do next?’ so I did one for New Year’s and Valentine’s Day and kept going from there.”

Litchfield began by spending her breaks adding to the ever-growing mural. Before long though, the avid artist found herself coming in on her days off — “just because I like doing it” — she says with a smile.

Most of her drawings are cartoons, meant to keep things as light and fun as possible. The one exception is a Ukrainian flag, with “Stand with Ukraine” written below, as a nod to her ancestry and the ongoing struggle overseas.

With the work on the skylights wrapping up and the protective sheets set to come down, CRH management are looking into ways to save her artwork and acknowledge that it’s been a real morale booster for all.

“Staff have been very drawn to it — pardon the pun — and it just brightens up their day when they’re going down that hallway,” says James Ostoya, site manager at CRH.

“So we’re going to salvage as much of it as we can, then decide on maybe putting it up somewhere else or creating another wall for people to draw on. It’s opened up a whole bunch of possibilities.”

Walking the corridor, people often stop to see what’s new or take in one of their favourites, a large Mardi Gras-themed section that stands out.

Shane Duff, a fellow patient service attendant and porter, notes that it’s been a bright spot for certain patients in particular.

“We have pediatric patients that we transport through here to the operating rooms. A lot of times, they’re scared or a little on the anxious side,” he says.

“Then all of a sudden, they come out of the elevator and see the cartoons. You can see their little eyes light up and see that smile, even under a mask. Anybody can just look at it and smile on a hard day.”

For Litchfield, who never signs her work and blushes when asked to talk about it, that’s all she needs to hear.

“It means a lot to me. It was just something I wanted to do for patients and staff — to make them smile.”