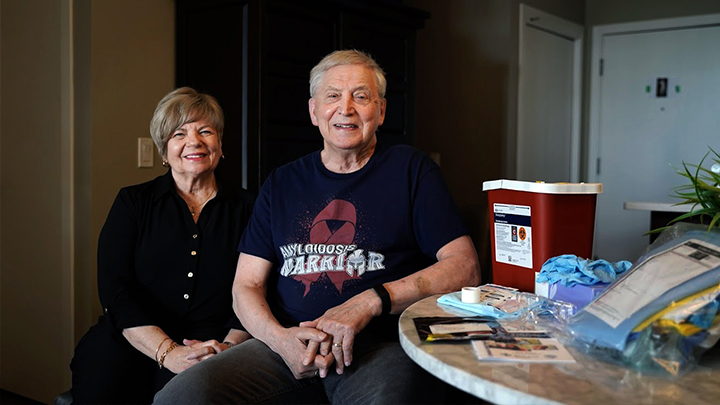 Denis Edwards is part of a research study in which he administers his own chemo via an injection in his stomach. Here he’s shown with his wife, Bonnie, in their home in Calgary, along with the supplies he uses. 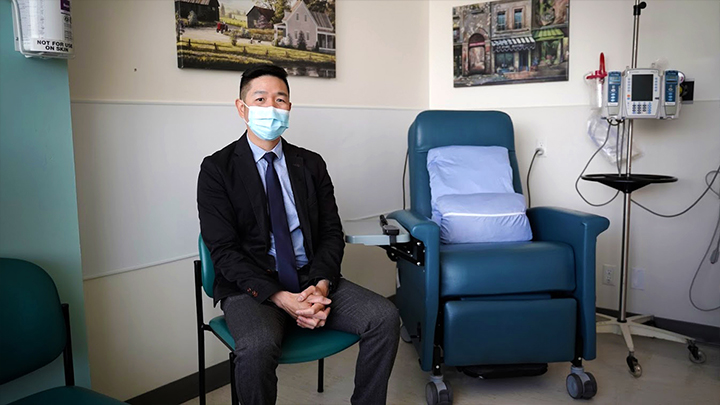 Dr. Jason Tay, hematologist, is pictured at the Tom Baker Cancer Centre in Calgary in a treatment area where patients undergo chemotherapy.

Calgary resident and cancer patient Denis Edwards injects himself with a chemotherapy drug every couple of weeks at his dining room table as part of a research study believed to be a Canadian first.

The 79-year-old self-administers a drug called bortezomib for his myeloma, a blood and bone marrow cancer, which saves him a lengthy drive from his home in southeast Calgary to the Tom Baker Cancer Centre in the northwest.

“Doing it this way is fantastic,” Edwards says of the chemo-at-home study.

“There are so many advantages to it. If I had to be at the hospital by 9 a.m., I would have to be up by six, and then it would take three or four hours out of my day — not to mention the fuel and parking costs.”

Edwards, who was a Greyhound coach operator for more than 33 years, is one of about 20 participants taking part in the research trial, which began in May 2020. Most of the study participants are volunteer myeloma patients in Calgary, but there are also three in Edmonton taking part.

“This is definitely a win-win,” says Dr. Jason Tay, the Alberta Health Services’ hematologist leading the study. “Patients are happy because it prioritizes their time while paying attention to efficacy and safety. It saves them a trip to the hospital, and it also saves the health system money and frees up appointment times for other cancer patients.”

The drug bortezomib has itself been well-studied and used for many years — but the idea that patients might be able to safely give themselves their own chemotherapy injections is relatively new.

“There are examples where nurses travel to patients homes and administer chemotherapy drugs, such as the Hospital at Home initiative at Alberta Children’s Hospital, but nothing in Canada where patients self-administer, and very little elsewhere that I’m aware of,” he adds.

St. Bartholomew’s Hospital in London is trying something similar, and interest is also being expressed by the Veterans Administration network of hospitals in the U.S., says Dr. Tay.

In the Alberta study, patients like Edwards (or their caregivers) receive hands-on training from nurses on how to administer the injections. To be eligible for the study, patients must have already received at least four doses of bortezomib, responding without significant side effects, and their oncologist must agree to their participating.

Nurses at the chemotherapy unit provide instruction on how to give a subcutaneous injection in the tummy and patients first practise by self-injecting saline before using the actual medication. They then receive pre-filled syringes from pharmacies at Tom Baker or, in Edmonton, the Cross Cancer Institute.

“We were well-instructed,” Edwards recalls. “Bonnie (my wife) helps get everything ready for me and then I do my thing. It’s two fingers over from the belly button, squeeze the fat and then feed it in slowly,” he says. “There’s nothing to fear except fear itself.”

The research study is supported through the Alberta Cancer Foundation’s (ACF) R.K. Dixon Family Award, established through a gift to the ACF from Mr. and Mrs. Dixon’s estate.

“We know from patients how difficult the cancer journey can be at a times. The chemo at home project has the potential to improve the patient experience by offering more independence and freedom,” says Wendy Beauchesne, CEO of Alberta Cancer Foundation. “We look forward to seeing the final results of this promising research and are grateful to the Dixon family for funding this important work.”

Dr. Tay says that so far study participants have a 100-per-cent success rate in giving themselves injections, although they’re given the option at any time of discontinuing the self-injections and returning to the hospital to receive them.

“There are many other chemotherapy drugs delivered subcutaneously that this concept could be applied to,” he says. “It could benefit patients in rural areas and totally revolutionize how we care for cancer patients.”

For his part, Edwards is all in: “There are so many positive things about it. It would be great if it could be implemented elsewhere.”