Olivia expands her palette of possibilities 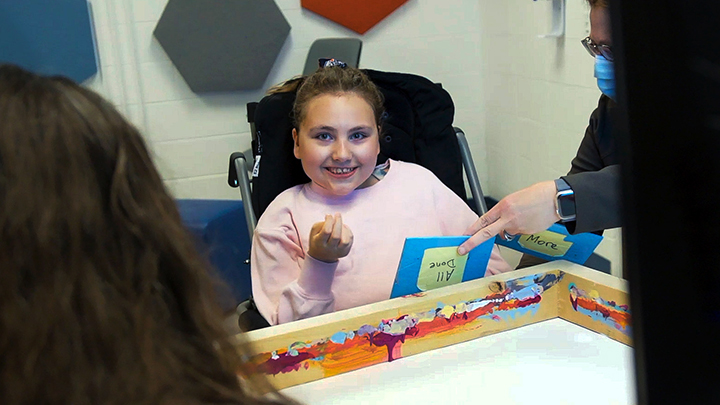 Olivia Terry is all smiles as she gets ready to paint a picture during her brain-computer interface appointment at the Glenrose. Photo by Evan Isbister. 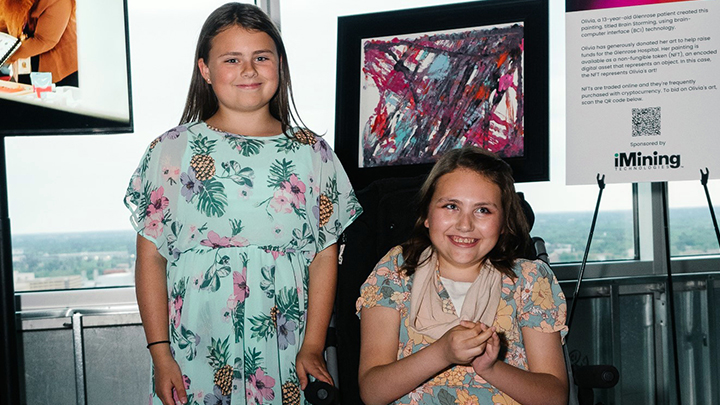 Lauren Terry stands alongside her sister Olivia at the Glenrose Rehabilitation Hospital Foundation’s Shining a Light event where Olivia’s painting, which she created using brain-computer interface (BCI) technology, is on display.

The 13-year-old lives with Rett Syndrome. Olivia has restricted physical control of her hands but is able to express her creativity by wearing a headset that acts as a direct communication pathway between her brain's electrical activity and a Bluetooth robot. Photo by Ezra Jeffrey.

EDMONTON — Olivia Terry, 13, looks forward to showing off her artistic side at the Glenrose Rehabilitation Hospital using brain-computer interface (BCI), an innovative technology that can be used to make art and play.

At four years of age, Olivia was diagnosed with Rett Syndrome, a rare genetic neurological and developmental disorder that causes a progressive loss of motor skills and speech.

“Olivia is unable to communicate verbally or through the use of her hands,” says Stephen Terry, Olivia’s father. “When she is using BCI, she has control of her actions and can show us what she is capable of. It is an amazing program that gives her the opportunity to showcase her abilities.”

Glenrose Rehabilitation Hospital pediatric patients with restricted communication and physical control are exhibiting their independence with BCI, which creates a direct pathway for communications between the brain's electrical activity and an external device.

Users control their BCIs by thinking about specific things, which translate to a command. Through practice, the BCI learns the specific patterns of one’s brain to perform a task, such as controlling music or playing a game.

“Patients can drive a wheelchair with BCI, play with remote-controlled cars, or make changes to their environment by turning on lights or music,” says Corinne Tuck, occupational therapist and clinical practice lead for assistive technology at the Glenrose.

“This technology is showing us just how smart these kids are. The applications we’re using here are just the tip of the iceberg. BCI is one type of neuroadaptive technology whose potential we are only beginning to understand.”

Donors to the Glenrose Rehabilitation Hospital Foundation have contributed $385,000 towards BCI at the site, offering pediatric patients new possibilities and new ways to interact with their environments.

In addition to BCI sessions, patients like Olivia receive foundation-funded home BCI kits with commercial headsets, which allow patients to practise their skills at home while playing with robots, video games or other customized applications developed by the Glenrose team.

Olivia’s parents know she loves having access to the technology just from seeing the smile on her face during her BCI appointments.

“She’s looking forward to borrowing some of the technology over the summer to play with neighbours, her friends and her sister,” says Stephen. “It’s wonderful to see her engaged in age-appropriate activities and be able to express herself.”

Olivia has gifted one of her pieces of artwork to the Glenrose Foundation, which will be used to raise funds for BCI research.