Reaching across the language barrier 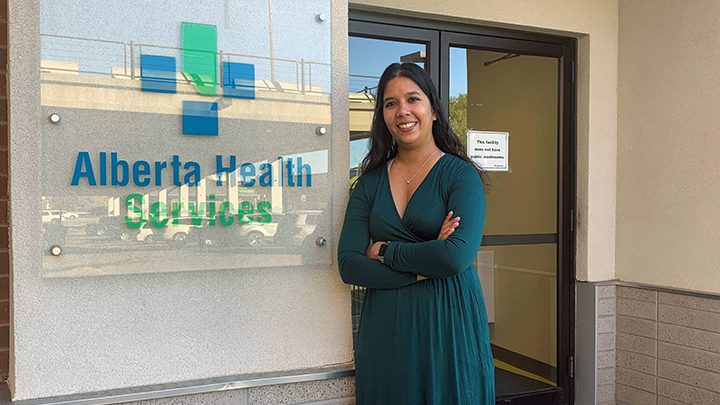 Dr. Mishka Singh says her time caring for refugees at Camp Moria on the Greek island of Lesvos has changed how she approaches and interacts with Syrian, Afghan and other patients here in Alberta. She learned firsthand how effective communication is vital - and today she often relies on Language Line, an interpretation service offered by Alberta Health Services, to better care for her patients. Here she’s shown at the Melcor Centre in Lethbridge. Photo supplied.

LETHBRIDGE - Caring for patients at a refugee camp in Greece has given a local physician a new perspective on the lives and backgrounds of her refugee patients here at home.

Family physician Dr. Mishka Singh says her experience in 2021 at Camp Moria on the island of Lesvos changed how she approaches and interacts with Syrian, Afghan and other patients when she returned home.

“When you meet those patients in Canada, you don’t see that background story of how difficult it was for them to get here,” says Singh. “Before they got to Moria, they had to get to Turkey, and to get to Turkey they either trekked or took a flight from their home country. They had to get across 12 kilometres of ocean from Turkey to the island, and then they had to wait - an average wait of four years - before being relocated.

“Now I see news articles as being about the very real plights of millions, and not just as some distant problem that doesn’t affect me. I hope the experience has made me both a more empathetic doctor and person in general.”

Raised and educated in South Africa, Singh, 34, came to Canada in 2015. While training in Cape Town, treating gunshot wounds and stabbings was common — the side effects of endemic poverty. Language could be such a barrier that communicating with patients sometimes had to be acted out, since no translation service was available and more than a dozen dialects were spoken in the area. It’s made her appreciate the resources available to her in Alberta.

In her Lethbridge office, Singh makes use of Language Line, a telephone translation service AHS subscribes to that grows increasingly valuable as the number of newcomers steadily grows.

Now when refugee and immigrant patients come in, she uses the Language Line if needed and she asks more questions than before: What was daily life like in their home country? What did they do for a living? What cultural practices are they missing?

Not only do such inquiries strengthen the doctor-patient relationship, but Singh adds that it improves diagnosis and treatment outcomes.

She says she hopes that when people read about her experiences, their hearts will be open to seeing new Canadians in a different light.

“These people had beautiful lives and now they must start all over. I hope when people see newcomers they will think about how they were forced from their homes and thrust into a new world where they don’t speak the language and don’t know the cultural beliefs.”

Of her time at Camp Moria, Singh recalls how supplies were scanty and treatment options limited.

“We provided basic treatment, but we were powerless to make them well. They were constantly faced with the realization that avenues to the normalcy they once enjoyed were now limited.”

As she treated their rashes and colds, Sing loved to chat with her patients. She soon realized that while she could do little to ease their true burdens, talking with them about their families or, with translation, listening to their anxieties, seemed to help more than anything else.