‘Quick discovery can save your life’ 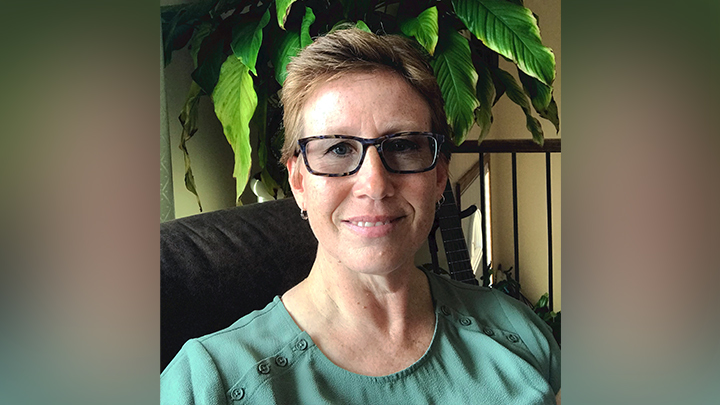 When the Screen Test Mobile Mammography unit came to Taber in 2019, Andrea Rose went for an X-ray, which detected breast cancer. Immediate treatment followed. “If I can encourage anybody to go and have a mammogram done — it doesn’t take any time whatsoever — that quick discovery can save your life.” Photo supplied.

When the Screen Test Mobile Mammography unit comes to Taber for one of its regular visits, it always parks within sight of Andrea Rose’s home. She would pass by on her way to work, look over at the trailer and tell herself, “I really should do that.”

When the Alberta Health Services’ (AHS) trailer pulled in for another visit in June 2019, Rose, who is now 53, found her inner voice a little harder than usual to push aside.

The AHS Screen Test Mobile, which began in 1991, increases access to screening mammography for women in communities where it is not readily available. A mammogram is an X-ray of the breast and has proven to be the most effective way to detect breast cancer. Early detection allows for a greater number of options for treatment and a better chance of survival.

“There was a poster up in the cubicle area where I work,” she recalls, “and it had the phone number on the bottom that you could tear off if you wanted to call and make an appointment. I kept walking past this poster and driving past the mammogram bus and I kept saying to myself ‘I really should do that. I really should do that.’ It might sound a little weird, but this time I felt very strongly that I shouldn’t just walk past; I should stop and grab the phone number, and not just take it to my desk and think about it, but actually make the phone call.

“And so I did. I got the last available appointment on the last day that the bus was available. After the mammogram was done, within a week I was called back to have more imaging done.”

Women ages 50-74 are the group most at risk of developing breast cancer, and Rose had just become part of the demographic. At first, she wasn’t too alarmed — she’d been called for follow-up before, only to be subsequently cleared. But this time, a second mammogram and ultrasound done days later in Medicine Hat confirmed the presence of a 3-centimetre tumour in her right breast. Treatment began almost immediately.

“I hadn’t been very regular with having mammograms,” Rose says. “I had a handful of them in the past, and I do have lumpy tissue so it’s hard to identify what is a natural lump and what’s not normal. It had been a few years since I had one, and that’s why I felt I needed to go.”

Rose learned she had HER2-positive breast cancer, the kind that grows in the presence of estrogen. Doctors began drug therapy to suppress estrogen production, launching her into instant menopause. By August she’d begun chemotherapy, followed by radiation and surgery — all in Lethbridge. By the time surgeons went in, the tumour had shrunk so much it was hard to find.

“They had gotten it all,” she adds, “and now I keep up with medications so there’s less chance of reoccurrence. I’ll have to be on estrogen suppression and some other meds for at least five years. I also see my oncologist every six months, with a mammogram every year.”

Rose hopes that if others can hear about her experience, they will be encouraged to get their regular mammograms.

“I spoke with a friend of mine the other day who said because of my story she’s going to make an appointment, and then another friend said the same thing. If I can encourage anybody to go and have a mammogram done — it doesn’t take any time whatsoever — that quick discovery can save your life. Getting that quick treatment — I was astonished at how quick things happened — then it’s all worth it.”

Early detection is crucial, says Monica Whitehead, director of Women’s and Children’s Health in South Zone, because while breast cancer is sometimes found after symptoms appear, many women have no symptoms at all.

“Early detection can also mean a less-intensive treatment path,” adds Whitehead. “We are so fortunate to have the Mobile Mammography unit in the South Zone. It literally saves lives. The Breast Health Clinic at Chinook Regional Hospital co-ordinates care and helps navigate next steps after a ‘suspicious’ mammography result.

“The next steps typically include a biopsy to confirm a diagnosis, surgical consultation, and/or oncology consultation if chemotherapy and/or radiation therapy are recommended as part of treating breast cancer.”

Breast cancer wasn’t something on Andrea’s radar until that spring day three years ago, but other types of cancer have affected many members of her family. When she got the diagnosis, she and her husband Michael decided soon afterward to trust the oncologist, avoid the Internet and embrace a positive, life-affirming attitude. They are the parents of three sons who actively promote men’s health, including the Movember campaign to raise money and awareness for prostate cancer.

“Our overall goal is to reduce deaths from breast cancer,” says Joan Hauber, manager, AHS Screen Test. “By bringing this service to rural communities, we’re reducing barriers to accessing screening mammography. Today, we are pleased to provide screening mammograms to more than 120 communities in Alberta.”

Visit for more information and a complete listing of Screen Test mobile sites.