Many hands helped pave the road to Bea's recovery 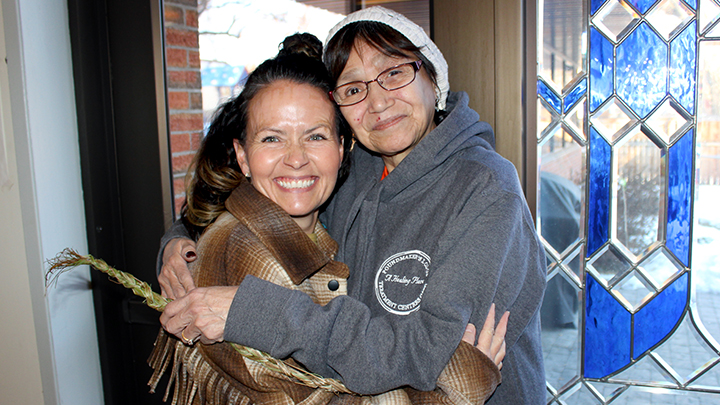 Bea Deak, right, holds a braid of sweetgrass as she embraces Heidi Davis, an AHS recreation therapist, at Harbour House, the YWCA Women’s Shelter in Lethbridge. Photo by Sherri Gallant.

Lethbridge woman gets a fresh start & 'good life' at 60

LETHBRIDGE — It often takes a number of tries before an individual succeeds at beating an alcohol addiction. That its grip is so tight makes Beatrice Deak’s story of recovery one which truly defies the odds.

Deak, a 60-year-old Indigenous woman, was 21 when her problem drinking began. A horrific car accident left her face disfigured and her entire upper body in pain; yet another challenge in a lifetime that brought hardships from the moment she and her twin sister were born in Bassano.

“Our parents left us at the hospital when we were three days old,” says Deak. “And they never came back for us.” But the little girls were adopted together and grew up with a loving couple whose home was just across the railroad tracks from the Siksika Nation, where the twins’ birth parents lived. In such a small community, it was soon common knowledge who the girls’ new family was.

“It was terrible,” says Deak, “because they would see my mom and dad’s car drive into town and people would run and get our parents, even if they were drinking in the bar. And they would come out, open the car doors, and pull us and tug on us and tell us to come with them. We would hide under my dad’s legs, and he would tell them to leave us alone, but we went through hell every time. Eventually we ended up not going into town with them anymore, and we grew up afraid of native people because of that.”

She and her sister were never provided with knowledge about their Indigenous heritage or culture other than the traumatic memories from their trips into town.

Years later, she was living in Lethbridge and had to escape from an abusive relationship. At the YWCA’s Harbour House women’s shelter, Deak received counselling and support, but for a long time she rejected the agency’s encouragement for her to seek treatment.

“I owe people so much for all the things that I put them through when I first got here — I threatened and got mad, tried to fight. I regret all that. One day I got beat up outside. My worker helped me and took me to the hospital. She was really there for me. I started thinking then about all the bad stuff that had happened to me, and it was all because of my drinking. I felt so bad.

“I went and I told my worker, ‘Go ahead. Make the call. I’m ready to go.’ I went to detox in Fort Macleod and then to treatment for 18 days.” A year-and-a-half later, her sobriety has held — with a single stint of treatment.

“I stuck with it. As much I wanted to drink I didn’t, and it started feeling really good being sober and I thought, ‘Hmm, maybe this is a good life.’ I’m gonna be there to help other people now.”

Her connections with the YWCA staff and workers in detox and treatment put Deak in touch with the multi-faceted supports of the Alberta Health Services (AHS) Addiction and Mental Health Outreach team and she’s become very involved in the team’s programs. At each step of recovery, she’s become more acquainted with the healing power of her Indigenous roots, and traditional practices are now a sustaining part of her life.

Heidi Davis, a recreation therapist with the AHS team, introduced Deak to equine therapy, where, through a partnership with Lethbridge Therapeutic Riding Association, horses are brought to a downtown park. The city’s homeless and urban Indigenous populations find deep and peaceful connections with the animals, as has Deak.

Davis also brought her to the Creative Recovery program, another community partnership between AHS and the YWCA, facilitated by Davis and addiction counsellors. Making art makes her happy, Deak adds.

Her connections with the community projects and her participation in group therapy and counselling will continue, even though she’s making plans now to move into her own place.

“We were talking about making sure we stay connected as far as those supports go,” says Davis. “In a few weeks we’re going to go and make a ribbon skirt with a local artist, for example. Those networks are so important no matter what. Bea’s story is so inspiring because any number of situations she’s been in could have been the end. But for some reason here she is, vibrant and alive, sharing and contributing. I feel like Bea has become a symbol of hope.”

Davis says the various members of the outreach team go to the clients as needed.

“We have nurses who come, addictions counsellors (the counselling team has grown from one part-time person just before the COVID-19 pandemic began, to four full-time counsellors now), recreation therapy and occupational therapy — based on need. And it’s not always pointing people toward resources in the community, it’s ‘Let’s go together.’ That nurturing is sometimes required.”

Davis helped to organize a recent pop-up clinic held in downtown Lethbridge at Galt Gardens — a project of AHS and partners designed to bring a wide array of healthcare services to the underserved in the city, people who usually don’t have access to medical care. One community partner was Lethbridge Legal Guidance.

Lawyer Wade Hlady was manning his table at the event when Davis brought Deak over and introduced them. Deak had recently learned that a suspect had been arrested in the murder of her brother Leo, and her emotions were in overdrive.

“Bea was so upset,” recalls Davis. “She wanted to go to court, she wanted to do a victim impact statement, she wanted her voice to be heard but she didn’t know how to do any of that. We were able to take her over to see Wade, and he just walked with her to find shade under the trees where they could talk. He briefed her on everything she could do, and he said he’d continue to help her as the case progressed. She was just beaming when she came back to see me. She said she felt truly heard.”

Courtney Peckford is an addictions counsellor with AHS South Zone Addiction and Mental Health Community Clinic. She’s been working with Deak since before she went to treatment.

“Miss Bea is a lovely, lovely lady who has worked very hard in her recovery. In my 15 years of work, I have never said ‘good luck’ in recovery to anyone. I've always said, ‘Keep working hard, because it is hard work,’ and she has worked really hard. She's an incredibly kind, loving, friendly, humorous lady — and I have enjoyed all of my time working with her.”

The unpredictable nature of substance abuse means outreach counsellors can end up working with clients for a long time.

“A lot of our clients are starting at the baseline,” adds Peckford. “They're still using. They may very well not have financial support. They may very well not have housing support. They may be very mentally unwell and emotionally unwell with a high history of trauma. So, we're often starting from that pre-contemplative state with individuals, and moving from there, to them taking action, can take a long time for some people. We stay connected as long as they are engaged.

“We often have referrals where we see them once and they kind of drop off the radar. We will try for a month or so to connect, find them, look for them in the shelters or with other agencies. Then we might get a call from one of those agencies and they’ll say, ‘Hey, we know you're connected to so-and-so, and we've seen them on the Overdose Prevention Service bus, or we've seen them at the shelter or we've seen them at the ‘Y or at the hospital.’ So, we will try for a while to engage. But sometimes people just drop off the radar and aren't ready. I have individuals in all different walks of life, all different age groups, all different income levels, all different levels of addiction and mental health struggles.”

Like Davis, Peckford says her connection with Deak isn’t about to drop off just because she’s doing so well.

“She’s looking at moving from a quite highly supportive environment into more independent living as she's getting further along with her recovery,” says Peckford, “so we've asked if we could meet a little bit more often and help her work through some of the stuff that she wants to do.

“There does come a point where we call it ‘graduating outreach’ — and clients can move into a little less supportive counselling role. We see how it goes — and sometimes that's where it goes. Clients will eventually close off and be on their way. But other times there are bumps in the road and we're back to meeting every week. So it's very fluid, very flexible.

“Stories like Bea’s are the ones that you need to be able to keep going; to know that even on the worst days, you have stories like these, and that's why we keep going.”