Fever has long been considered to be one of the hallmark signs of a patient with a severe illness, such as a life-threatening infection. However, over a 5.5-year period from 2004 to 2009, the number of patients with fever fell considerably from just over half to about one-quarter of all ICU admissions.

“For some time now, critical care physicians have wondered whether fever is becoming a less common feature among patients admitted to intensive care units,” says Dr. Daniel Niven, lead author of a newly published research paper on the subject and a critical care medicine specialist. 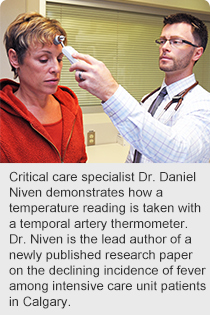 “Our study identified that there has been a steady decline in the occurrence of fever each year –and it’s a decline that we really can’t explain without further research.”

There is a drop both in the number of patients who have fever when they are admitted, and those who develop fever while they are in the ICU.

To the authors’ knowledge, no other jurisdictions in Canada or internationally have yet reported on similar declines in fever.

An elevated body temperature, or fever, is an important vital sign. While the temperature that defines a fever varies according to different patient factors, a temperature above 38.0 degrees Celsius generally indicates the presence of fever. In the Calgary study, researchers used the accepted definition for fever in patients admitted to an ICU, which is a core body temperature greater than 38.3 degrees.

Surprisingly, the exact physiological mechanisms and purpose of fever are still not entirely understood. This uncertainty has led to an ongoing debate in the medical community regarding whether fever should be controlled or allowed to run its course.

While physicians always treat severe fever (core body temperature greater than 39.9 degrees Celsius) with medications or other treatments to lower body temperature, it remains unclear whether fever of lesser severity should be treated.

Despite the significant decline in the number of patients in Calgary ICUs who are found to experience fever, Dr. Niven suggests that this does not appear to be associated with any noticeable difference in the severity of illness of the ICU patients.

“We saw no corresponding changes to overall outcomes, such as the number of deaths in ICUs, so it’s difficult to say what is the significance of this finding on fever.” 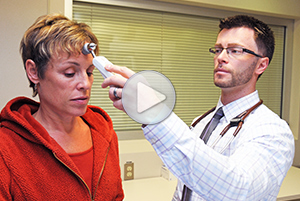 Researchers initially suspected that a change in the type of thermometer used in ICUs might explain the drop in fever occurrence. In 2006 practice changed from using an ear-based temperature measurement device (tympanic membrane thermometer) to a device that measures temperature over the temple (temporal artery thermometer).

He speculates that the gradual reduction in the occurrence of fever could be due to one or a combination of factors.

“Part of what we’re seeing could be the summative effect of all the different infection prevention strategies that have been implemented over the last decade,” Dr. Niven says. These strategies include everything from hand-washing practices to how intravenous lines and ventilators are handled.

Another possibility is that the types of bacteria infecting patients are simply less potent than in years past. Or the decline could be due to a greater number of patients on immunosuppressive drugs, such as those that are used to treat Crohn’s disease or rheumatoid arthritis, which would suppress the body’s ability to mount a fever during a severe illness.

“Medical knowledge and the practice of medicine are continually evolving and the decline in fever that we’ve documented may signal the beginning of some changes in how fever is understood,” Dr. Niven says.

The data researchers analysed came from ICUs at Foothills Medical Centre, Rockyview General Hospital and Peter Lougheed Centre. Dr. Niven says that researchers plan to examine data beyond 2009 to find out what is happening with the incidence of fever today.

The paper, “Fever in Adult ICUs: An Interrupted Time Series Analysis,” was published in the journal Critical Care Medicine in August 2013.