When Nazdana Jan and her family celebrate her second birthday on Aug. 10, it will be without the stresses they’ve been living with since she was born.

Nazdana came to Calgary’s Alberta Children’s Hospital in Calgary from Winnipeg in November 2012 with a urea cycle disorder (UCD), a rare genetic disease that causes ammonia to build up in the body, which can lead to brain damage and death.

Nazdana subsequently became the first patient in Canada to receive an experimental transplant of liver cells in order to improve her odds of survival until she could undergo an organ transplant. 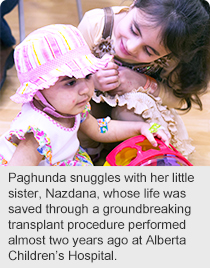 “It’s been a very stressful and emotional journey for us, but she is a miracle baby,” her father Jouhar says. “The liver cell transplant at Alberta Children’s Hospital was the big thing that gave new life to Nazdana.”

The toddler successfully underwent a liver transplant in Toronto in April of this year, but the liver cells she received prior to that helped to control the ammonia levels in her body.

“One of the symptoms of ammonia buildup is sleepiness, so we would always get concerned if Nazdana seemed too sleepy and we would wake her up to check on her,” Jouhar says. “But now we don’t have to worry about that.”

Nazdana and her family visited ACH on July 25 for the last time as part of a research study evaluating the effectiveness of the liver cell transplant procedure.

A team at ACH – led by medical geneticist Dr. Aneal Khan – has now performed the procedure on a total of five infants with urea cycle disorders.

“The therapy is designed to buy time until infants have grown enough to improve the chances of success with a solid organ liver transplant. It’s a bridge therapy until a donor organ can be found,” Dr. Khan says.

Of the five cases to date, two have successfully made it to liver transplant, two are progressing well, and one has died of an infection unrelated to the treatment.

Most newborns with a UCD die within the first two weeks of life without treatment. A special diet and medications help, but the risk of brain damage from uncontrolled ammonia levels remains high. The only long-term treatment is a liver transplant, but a transplant in a small child has less chance of success and there is limited availability of organs.

Ammonia is naturally produced as the body uses protein but, for those with UCDs, the process of converting ammonia to urea (a harmless substance which gives urine its yellow colour) does not work properly due to a gene abnormality. The condition is incurable and very rare. Alberta Children’s Hospital treats about two newborn babies with a UCD per year. In Canada, fewer than 50 babies are born annually with the condition.

“The research is still ongoing, but we have found better control of ammonia levels after treatment with liver cells, which helps protect the brain and improves the odds for these children,” says Dr. Khan, who is also an assistant professor of medical genetics and pediatrics at the University of Calgary, and a member of the U of C-AHS Alberta Children’s Hospital Research Institute.

“With the support of our colleagues at Alberta Health Services and the University of Calgary, we have been fortunate to have performed more liver cell transplant procedures than any other centre in North America, and hope to see this develop as a national centre of excellence at Alberta Children’s Hospital,” Dr. Khan says.

Nazdana’s procedures at ACH took place over six days, with each liver cell infusion taking about an hour.

Of the five patients who underwent the procedure, four are part of a research trial sponsored by the biotechnology firm Cytonet LLC, and one received liver cells on compassionate grounds.

Through a complex process, Cytonet transforms liver cells into cells that can be transplanted from donor organs that would otherwise go to waste.

Nazdana’s father, Jouhar Ali, has nothing but thanks for the care his daughter has received.

“I am really grateful and appreciate all the doctors and nurses, including the social workers, for their help and support,” he says.