When Frank Korencik started hallucinating, hearing voices and seeing shadowy figures out of the corner of his eye, he thought he might just need to get more sleep.

“Then I began feeling dizzy and started vomiting. I knew something was seriously wrong,” says the 32-year-old truck driver. “I could smell the exhaust leaking into my truck, and I knew it had something to do with my symptoms.”

Korencik had carbon monoxide (CO) poisoning and was hospitalized for two days in October. 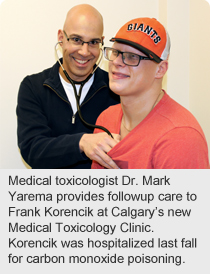 After leaving hospital, he was able to have one-on-one assessments and followup with a toxicologist, thanks to a new Calgary clinic for patients who have come in contact with drugs, substances and other agents that pose a threat to their well-being.

The Poison and Drug Information Service (PADIS) Medical Toxicology Clinic is a monthly outpatient clinic that provides evaluation, diagnosis and management of patients who have been exposed to potentially toxic substances such as lead, arsenic, mercury, carbon monoxide, pharmaceuticals and herbal preparations.

Opened last September, it is the only clinic of its kind in western Canada.

“In the past, physicians had to consult a toxicologist over the phone and there was often no way to assess the patient in person. We knew we could do better,” says Dr. Mark Yarema, a medical toxicologist and Medical Director of PADIS.

“The Toxicology Clinic allows us to sit down with the patient, explain symptoms, interpret test results and answer their questions.”

The clinic cares for adult patients who have had unintentional and intentional overdoses, exposures to industrial chemicals and environmental hazards, and exposures to natural toxins.

Patients are referred to the clinic by their physician.

“We see a wide range of patients. Some have had serious exposures to substances like arsenic or lead, but others may simply have above-average levels of mercury in their blood because they eat a lot of seafood,” Yarema says.

“In many cases, it’s simply an environmental or dietary exposure, and our job is to reassure them that they have nothing to worry about.”

The clinic is also able to provide advice on expensive and often unnecessary courses of treatment (chelation) to remove heavy metals from the bloodstream.

“Very few of these treatments have been shown to work. We can give them the facts and discourage patients from spending their hard-earned money,” Yarema says.

The monthly clinic typically sees between two and five patients per clinic day, which means clinic staff are able to spend up to 90 minutes with each patient.

“Patients at the Toxicology Clinic have the time to discuss all of their concerns in detail, which helps set their mind at ease,” Goulard says. “The clinic is also one of a handful of its kind in the country – it’s an invaluable resource for patients.”

Korencik says the followup care he received after being hospitalized has made a tremendous difference to his recovery after CO poisoning.

“They took my vitals, assessed my general health and did memory tests,” he says. “I had a million questions and it’s great having the time to ask anything you want. You can’t beat it.”

Physicians can refer patients to the program by calling 403-944-6950 or visiting www.padis.ca.