On the hunt for COVID-19 mutants 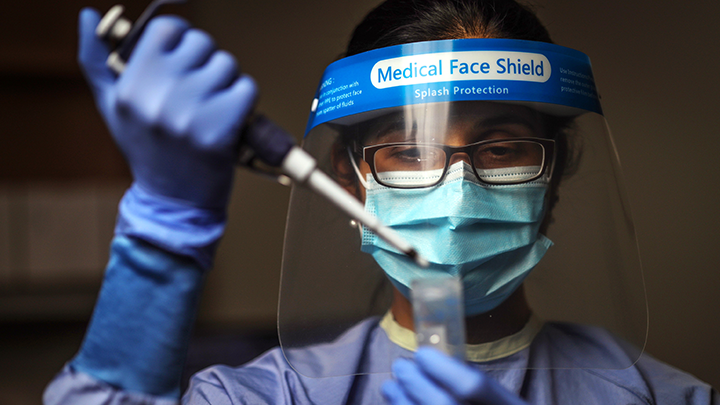 “We created our own lab-developed tests to screen all positive COVID-19 samples for variants of concern,” says Kanti Pabbaraju, a lab scientist who leads a specialized diagnostics team at Alberta Precision Laboratories. Photo by Leah Hennel 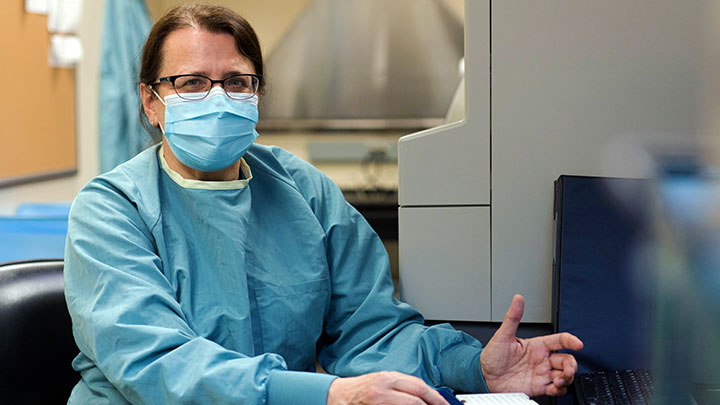 “We were pretty vigilant early on, testing all positive COVID-19 samples for mutations,” says Sandy Shokoples, a member of the team of lab scientists and technologists at Alberta Precision Laboratories. Photo by Evan Isbister

Alberta lab scientists track the evolution of variants during pandemic

It was hardly the Christmas present Sandy Shokoples had hoped for. But as part of Alberta’s team of leading experts in emerging diseases, the arrival of an international traveler with COVID-19 on Dec. 24 gave an unexpected twist to her yuletide plans — and another ominous ‘first’ for Shokoples, the lab scientist who discovered Alberta’s first case of the virus nine months earlier.

Last December, the hunt had barely begun for a concerning new strain of the coronavirus that emerged in the United Kingdom — and was quickly spreading around the globe.

“Tracking these variants could be key to whether Alberta’s pandemic shows signs of slowing or potentially turning into a third wave,” says Shokoples. “So it was really an ‘all-hands-on-deck’ situation, even if it was Christmas. We were pretty vigilant early on, testing all positive COVID-19 samples for mutations.”

Each and every day, Sandy and a team of lab scientists and technologists from Alberta Precision Laboratories’ (APL) hunt for these mutations in the virus’s RNA — looking for alterations in its genetic code.

Sandy stayed up overnight on Christmas Eve in APL’s molecular microbiology and genomic sequencing lab in Edmonton, where she created multiple tests to validate the U.K. variant and made sure her tests were accurate. After a long night validating the tests multiple times, for certainty, the sample showed to be a COVID-19 U.K. Variant.

“We tested this particular sample on Christmas Eve, and we were quite surprised to see the sample tested positive for the U.K. variant,” she adds. “It was surreal to be going through this again since discovering the very first positive case back in March 2020.”

The next day, on Christmas morning, Sandy was back at the lab to notify her team of the confirmed U.K. variant. One of those people was Dr. Graham Tipples, APL’s medical-scientific director of public health.

"I phoned Dr. Deena Hinshaw on Christmas morning with our news of the first U.K. variant,” says Tipples. “It’s not the greatest news to get on Christmas, but the silver lining is that we were able to move fast — and it’s great to see our lab team get recognized for the difference they’re making.”

APL has been actively monitoring the genetic code of SARS Co-V2, the virus that causes COVID-19, in Alberta since the beginning of the pandemic to understand how it is evolving in our population and to detect the arrival of variant strains from outside the province.

Once the first UK variant was identified, work began to develop a test that could more quickly and easily identify the specific mutations found in that variant.

“We created our own lab-developed tests to screen all positive COVID-19 samples for variants of concern,” says Kanti Pabbaraju, a Calgary-based lab scientist who leads APL’s specialized diagnostics team. “This approach has provided a very rapid response and maximum flexibility to the constantly evolving situation of the COVID-19 variants.”

The team is now able to screen all positive COVID-19 samples for variant strains that have been identified from the U.K., South Africa and Brazil. These have been classified as Variants of Concern because they appear to spread more easily than other strains.

Alberta’s lab team have screened more than 7,000 COVID-19 positive samples for these variants to date. In addition, hundreds of selected samples are subject to full genome sequencing each week, to monitor for new mutations.

“By monitoring its genetic code, and sharing this information with national and international health authorities, we are able to identify and track variations of the virus that may pose new challenges for diagnosing and treating the disease in the community,” says Dr. Matthew Croxen, who leads APL’s genetic sequencing work.

Being on the front line of Alberta’s response to COVID-19 has been a career highlight for Sandy Shokoples, who has also been involved in watching for other worrisome diseases such as SARS and the Ebola virus.

“It has been fascinating and exciting work, but like everyone, I will be glad when it is over,” she adds. “Unfortunately, we always have to be on the lookout for something new.”