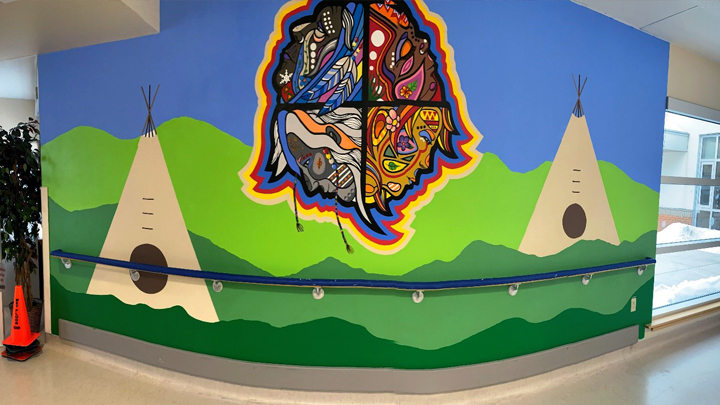 This medicine wheel mural by artist Chelsea Petluk at Sutherland Place in Peace River is part of the project that included murals, life stations and wayfinding in Peace River and Fairview Continuing Care. Photo Supplied. 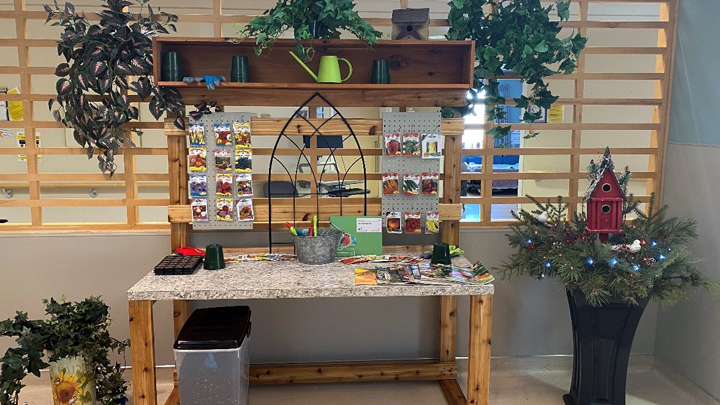 Colourful and full of activity, the hallways and common areas of the Fairview Continuing Care complex and Sutherland Place Continuing Care in Peace River are bright and full of life thanks to a recent grant from the Network of Excellence in Seniors’ Health and Wellness.

The two facilities partnered on a proposal — under the theme Supporting Dementia Innovation in Rural Long-Term Care — and received $40,000 to be split between sites.

“The big focus for our site was our special care unit, which is a locked secure unit,” says Kerry Appleton, recreation therapist for Fairview Continuing Care.

“We have a lot of responsive behaviours there, and our hope was to help reduce some of those. We were seeing things such as hoarding, going in and out of residents’ rooms and taking other people’s items; a lot of wandering,” she adds.

With an additional matching grant of $20,000 from the Fairview Health Complex Foundation, Fairview Continuing Care has made some significant changes to the facility.

“We created life stations, which are activity areas that simulate areas of the home,” says Appleton. “We developed a tool shop where we replicated what someone’s garage or tool shed may look like, but with safe tools.”

A peg board with outlined tools proved popular. As staff would remove the tools, residents would walk by and stop to reorganize it and hang the tools back in their proper spaces.

The team also created a homelike kitchen area which includes safe food items such as boxes, cans and artificial fruit and vegetables.

There’s also a greenhouse area where residents can find and use gardening implements, flower pots, seed packets, artificial flowers and vases that they can arrange.

“The life stations are intended to be very hands-on,” says Appleton.

The stations had an immediate impact on Fairview residents.

“We had one lady who was witnessed going in and out of rooms 30 times in a three-hour period. Afterwards we noticed she was spending a lot more time at the kitchen life station, and we actually found a lot of the items, fake fruit, in her room,” says Appleton.

“So instead of hoarding someone else’s things, she was taking things from the life station which we were perfectly fine with. We would rather her do some shopping and collect items from there than taking items from other residents’ rooms.”

In Peace River, Sutherland Place has a different model; there is no locked unit for dementia care. Residents who require dementia care live in the general population.

“Our goal was to make our environment a lot brighter, more inviting and dementia-friendly,” says recreation therapist Sue Aubin. “We were looking at physically changing colours, so we contracted with an artist who did an Indigenous wall mural for us.”

A bright medicine wheel mural was painted by local artist Chelsea Petluk, whose grandmother, a respected Elder in the community, had been a resident at Sutherland Place.

“It had a lot of meaning for her,” Aubin adds. “She did a beautiful artwork. The medicine wheel that depicts how each season is represented through the different stages of life.”

The Peace River team also created some hands-on life stations — a tool shop, a nursery, a gardening area and created a number of special displays and murals to help with wayfinding in the facility.

Shadow boxes with vintage cars and tools, and colourful murals — including one from which residents can pick fruit and place in baskets — have brought a brighter, more homelike atmosphere to Sutherland Place.

“We need to get away from the institutional look,” says Aubin. “It helps to bring our residents back to life and makes it a home.”

Appleton agrees that visual and sensory stimulation reduces behaviors, lowers tension and brings smiles to the faces of both residents and staff.

“Families are commenting about how much more homelike the environment is — and it’s prompting a lot of discussion,” she says.

Noting that the projects were very much a team effort at both facilities, Aubin adds: “I think it’s given the staff a big sense of pride and ownership in the facility as well.”