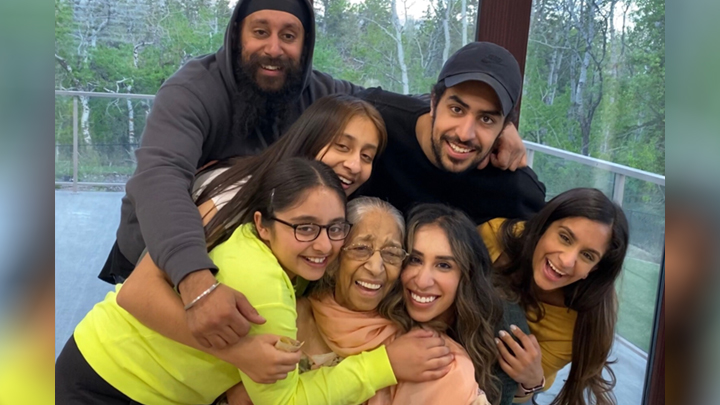 The Randhawa family are being recognized this year with a National Philanthropy Day Award from the Edmonton & Area Chapter of the Association of Fundraising Professionals. Alberta Cancer Foundation nominated the family to thank them for their fundraising efforts in memory of their late mother, Gurmeet Randhawa, seen smiling here in the front row, surrounded by her family’s love. Photo supplied.

This Monday, Nov. 15, many charities and non-profits will celebrate National Philanthropy Day — a special awareness day led by the Association of Fundraising Professionals (AFP) — to recognize philanthropic individuals and organizations across North America.

Once again, AFP is hosting award programs across Alberta to recognize and celebrate the exceptional people who give so generously. Several of Alberta Health Services’ own philanthropic partners are taking part this year by nominating more than 20 individuals and organizations for awards.

“The COVID-19 pandemic has challenged us in many ways, but no matter what we come up against, Albertans continue to show extraordinary support of our healthcare system,” says Dr. Verna Yiu, President and CEO of Alberta Health Services.

“Thank you to our philanthropic partners for your continued kindness and generosity toward our patients and healthcare providers across the province.”

This year, our philanthropic partners are recognizing the following nominees through AFP’s National Philanthropy Day:

AHS is grateful to our philanthropic partners and their generous network of donors, sponsors and volunteers for their support of healthcare across the province.