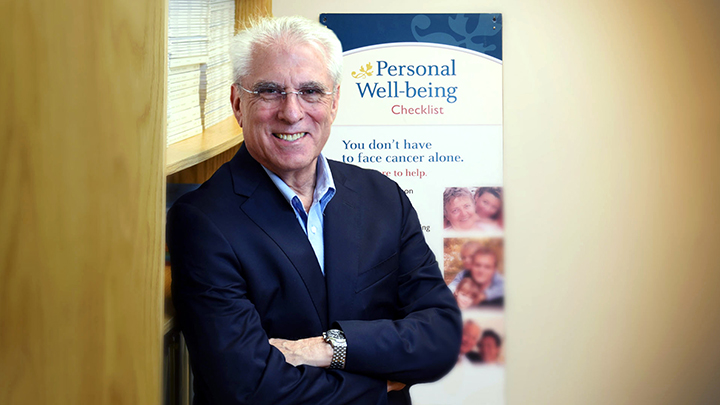 “Psychosocial care is about whole patient care and I believe firmly that you cannot treat cancer without treating the distress that accompanies it,” says Dr. Barry Bultz of the Tom Baker Cancer Centre in Calgary. Photo supplied.

CALGARY — The Order of Canada has a new Officer in pioneering psychologist Dr. Barry Bultz of the Tom Baker Cancer Centre for his tremendous contributions over more than four decades to the field of Psychosocial Oncology.

In making her new year’s announcement, Gov. Gen. Mary Simon praised Dr. Bultz “for his sustained contributions to the field of psychosocial oncology, notably his pioneering research of distress as the sixth vital sign.”

“Psychosocial care is about whole patient care and I believe firmly that you cannot treat cancer without treating the distress that accompanies it,” says Dr. Bultz, a previous recipient of The Alberta Order of Excellence, inducted in 2016.

He described it as a “breathtaking moment” to get the call announcing his appointment, adding that it reflects his team’s commitment to whole-patient care at the TBCC. The Order of Canada recognizes Canadians “whose service shapes our society, whose innovations ignite our imaginations and whose compassion unites our communities.”

Through his pioneering work here, Dr. Bultz helps patients and their families deal with the fear, depression and life concerns — the psychosocial factors — that create patient distress at diagnosis and during treatment. His work has influenced cancer care well beyond Canada’s borders, and led to the establishment of global acceptance of screening for distress as the sixth vital sign for cancer patients.

“I’ve been doing this for more than 40 years, working with cancer patients on the difficult challenges that they face in not only coping with cancer but living with the long-term side-effects and survivorship issues, as well as trying to destigmatize some of the stress related to the anxiety and depression that often accompany the illness,” he says.

“Some of the research we’ve done suggests that approximately 35 to 45 per cent of patients have significantly high levels of distress, so now we’re screening patients. Now we’re including the whole issue of living well with cancer.”

Dr. Bultz came to Calgary in 1981 and was the first director of Psychosocial Oncology at the TBCC and continues to be a respected leader in clinical, research and education.

He earned his Bachelor of Arts in Psychology at Sir George Williams University (now Concordia) in Montreal in 1969. He followed it with an M.A. in Counselling Psychology from Pasadena College in California in 191, and his Ph.D. in Clinical Psychology from United States International University in San Diego in 1974.

He studied with well-known leaders in the field of psychology, including Viktor Frankl, whose work had a profound influence on him. From the beginning, Dr. Bultz’s work focused on health promotion and quality of life. His initial research was with surgical patients, examining the psychological factors of recovery.

“My personal philosophy is to live a meaningful life, one without regret and this is what I have tried to encourage in my patients,” says Dr. Bultz. “No matter where they are on their cancer journey, life can be meaningful.”

Notable previous honours for Dr. Bultz include: the Award of Excellence in Medicine and Health from the Canadian Cancer Society – Alberta Division, and the Award of Excellence from the Canadian Association of Psychosocial Oncology. In 2012, he was granted the Dr. Peter Geggie Award for outstanding achievement and contribution to the Canadian Cancer Society. In 2013 Barry received the Queen Elizabeth II Diamond Jubilee Medal. In 2016, he was named the recipient of the International Psycho-Oncology Society (IPOS) Arthur M. Sutherland Award — the highest honour in psychosocial oncology from IPOS.