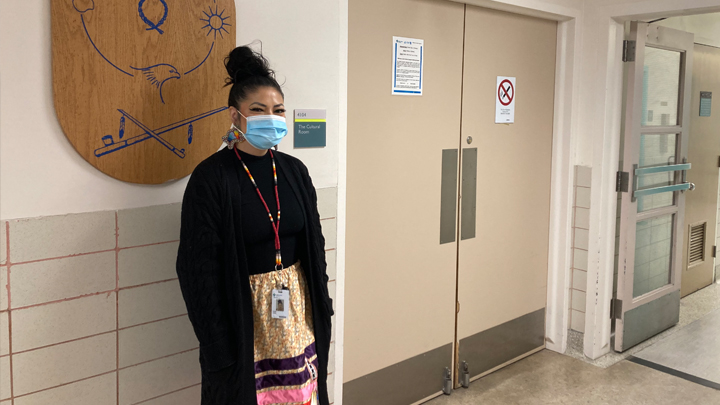 Brenda Laboucan, manager, Indigenous Wellness Core, stands near The Cultural Room, temporarily named so until a meaningful name is given that will reflect and honour Indigenous culture at the Royal Alexandra Hospital. Photo by Sharman Hnatiuk.

'The Cultural Room' to be given new meaningful name

EDMONTON — In The Cultural Room, a space at the Royal Alexandra Hospital (RAH), cultural helpers, with the support of Elders, are providing a safe space to assist patients and families in need of traditional healing practices while in hospital and away from the support and comfort of their communities.

The name is temporary, however, but it’s a symbol of the efforts underway to find a meaningful name that will reflect and honour Indigenous culture at the site.

“We hope that by changing the name, the community will see themselves within the RAH,” says Brenda Laboucan, manager, Indigenous Wellness Core. “This name change supports a safe space and hopefully a catalyst for conversations around the significance of names.”

For the past 20 years, the room has been known as the Charles Camsell Gathering Room; however, it was not intended or named for Indigenous patients.

The Charles Camsell Indian Hospital officially opened in Edmonton in August 1946, named after Dr. Charles Camsell, a former deputy minister of Mines and Resources. According to provincial archives, it was operated by Indian Health Services, a branch of the Canadian Department of National Health and Welfare, from 1946 to 1980, when it became part of the Metro-Edmonton Hospital District No. 106 and operated under the local health authority of that time as a general hospital.

AHS acknowledges the role that the healthcare system played in the mistreatment of Indigenous people in Alberta. It is important to recognize that naming safe Indigenous spaces contributes to the revitalization and the strengthening of the relationship between AHS and Indigenous communities through the recognition of histories, languages and cultures.

“The culturally appropriate naming of the space is another step towards reconciliation for the RAH and the Edmonton Zone,” adds Laboucan.

Moving forward, RAH leadership will work with the Indigenous Wellness Core to reach out to Elders, patients, families, communities and Indigenous organizations to find a more suitable name for the space that reflects the purpose and intent of the room.