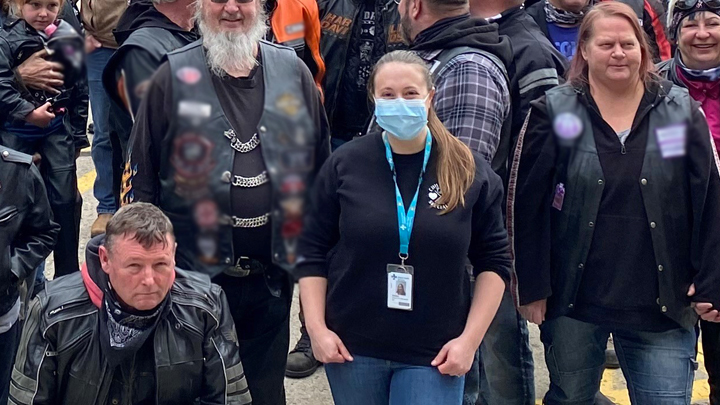 About 150 members of the Southern Alberta Bikers organization converged at Chinook Regional Hospital recently to deliver stuffies and cash to the Child Life Program through their annual Teddy Bear Parade.

LETHBRIDGE — Dallas Harty’s heartstrings get twanged every year when he takes part in the Teddy Bear Parade, put on by the Southern Alberta Bikers organization.

Motorcyclists who ride in the annual event contribute either a new teddy bear or stuffy or give a cash donation that goes to the Child Life Program at Chinook Regional Hospital.

On May 7, about 150 participants on 103 bikes pulled into the south loop at Chinook Regional Hospital after a parade that saw them ride through many parts of Lethbridge. They were met with gratitude by Brandi Emes and Jodie Anderson-DeBoer, Child Life Specialists, who received 180 teddy bears and $485 in cash, with more to come.

“I love being a part of it every year,” says Harty, speaking on behalf of the organization. “It makes such a difference to the kids at the hospital. I have said this a million times, but I spent a fair amount of time as a young kid in the hospital, and I know what it’s like to be there in the little rooms, not having friends and family there all the time. It can be tough go.

“To be able to make a little bit of a difference, to be able to put a smile on a kid’s face, even for a moment, just warms my heart. It’s just unfortunate that in the past couple of years because of COVID we haven’t been able to interact with any of the kids on the ward, but I remember in the past how nurses would bring some of the kids down to the foyer so we could interact with them a little bit. Some of those moments I’ll never forget as long as I live.”

Emes adds that staff are thankful for the effort that goes into creating the event and collecting the toys and cash.

“I’m very excited to be able to tell all the kids who receive a teddy bear that it got to ride on a motorcycle to get to the hospital,” she says. “It was such a wonderful turnout, and we just appreciate what they do so much.”

Indeed, as the riders assembled in the parking loop with their donations, a cheer went up when they looked up and saw a staff member holding a ‘Thank You’ sign in one of the hospital windows.

“That really warmed everyone’s hearts,” says Harty. “To whoever that was, thank you very much. That gesture meant a lot to us.”

After the donations were dropped off, about 20 riders from the group carried on with a Poker Run around southern Alberta, which raised even more money for Child Life Services.

“At our next meeting we’ll have that tally and we’ll be dropping that money off soon,” adds Harty.