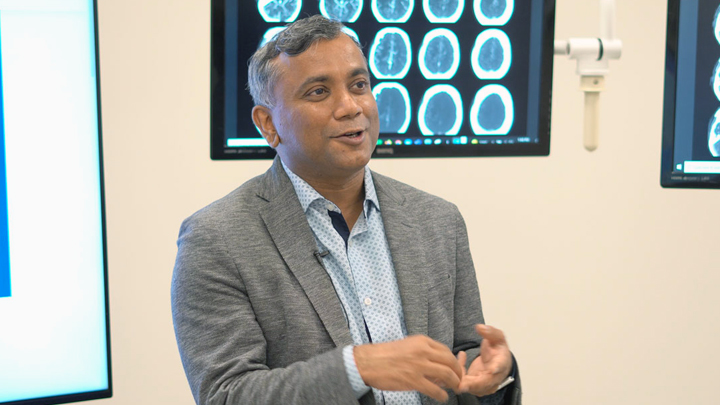 Dr. Bijoy Menon, a stroke neurologist at Foothills Medical Centre, led researchers in a study that’s revolutionizing the treatment of acute ischemic stroke, which occurs when blood supply is cut off to part of the brain. Photo by Quentin Collier.

CALGARY — In the largest stroke clinical trial ever run in Canada, researchers have shown Tenecteplase (TNK) — a safe, well-tolerated drug commonly used as a clot-buster for heart attacks — is also an effective treatment for acute ischemic stroke.

Led by researchers at Foothills Medical Centre, the study included 1,600 patients at hospitals throughout Canada.

"It is truly an important finding that I share with my colleagues from coast to coast. Through this collaboration, these findings could revolutionize stroke treatment throughout the world," says Dr. Bijoy Menon, a neurologist in the Calgary Stroke Program and principal investigator on the study.

"Tenecteplase is known to be an effective clot-dissolving drug. It is very easy to administer which makes it a game changer when seconds count to save brain cells."

Based on current guidelines, Alteplase (tPA) is the recommended drug for acute ischemic stroke patients. The challenge is that the drug is more complex to administer. It takes up to an hour and requires an infusion pump that needs to be monitored. The pump can be cumbersome when transporting a patient within a hospital, or to a major stroke centre for treatment.

Because Tenecteplase can be administered as a single, immediate dose, it saves critical time for patients and makes transportation — by ambulance or STARS — much easier. It will also make the treatment more accessible to patients in less-affluent countries where infusion pumps aren’t available.

The AcT Trial compared TNK to tPA in a randomized trial. The results, published recently in The Lancet, showed that TNK worked as well as, if not better than, the current recommended drug, tPA.

Along with discovering a better way to treat acute ischemic stroke, the team also established a more cost-effective and efficient way to conduct clinical trials.

The trial engaged patients and their families in study design and completed all enrolments during the pandemic when health systems were under significant stress.