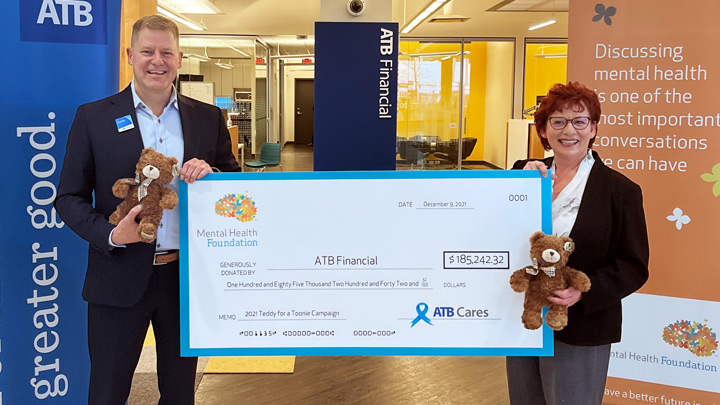 Curtis Stange, president & CEO of ATB Financial, and Deborah McKinnon, president & CEO of the Mental Health Foundation, strike a philanthropic pose with a huge cheque. This year, ATB Financial is being recognized with a National Philanthropy Day award from the Edmonton & Area Chapter of the Association of Fundraising Professionals. The Mental Health Foundation nominated ATB to thank them for their fundraising efforts toward youth mental health. Photo supplied.

Many charitable organizations are celebrating National Philanthropy Day this Tuesday (Nov. 15), an awareness day that honours philanthropic individuals and organizations across North America.

Led by the Association of Fundraising Professionals (AFP), award programs are taking place to recognize philanthropists in several communities including Edmonton and Calgary. Several of Alberta Health Services (AHS)’ own philanthropic partners are taking part by nominating individuals and organizations for these awards.

“Alberta Health Services is fortunate to work alongside 69 foundations and 48 auxiliaries to advance healthcare in our province,” says Mauro Chies, Interim AHS president & CEO. “We’re grateful to them and their many generous donors for their support of equipment, programs, services and research which help us provide the best possible care to Albertans.”

For more information on AHS’ philanthropic partners and how you can show your support, please visit ahs.ca/give. - Written with content contributed by foundations