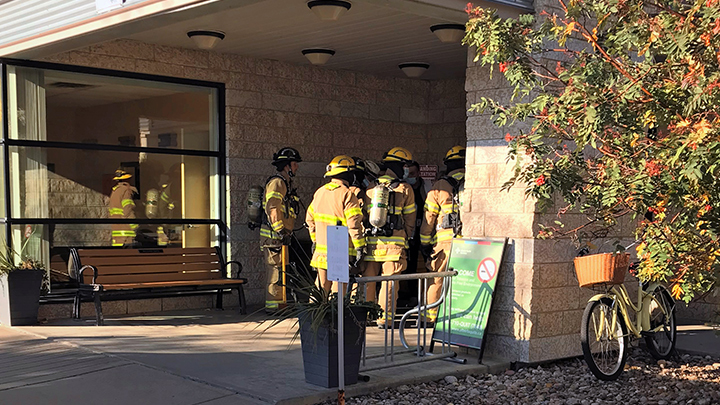 Big Country Hospital in Oyen teamed up with Oyen Fire Department recently to conduct an emergency simulation to test their preparedness and improve their future response to potential disasters. Photo by Breea Tamminga.

OYEN — It’s often said that practice makes perfect, so when a ‘fire’ broke out this fall at Big Country Hospital, it was the perfect opportunity for Oyen’s Fire Department and AHS’ frontline staff to put their skills to work.

Fortunately, the ‘emergency’ was a coordinated simulation between AHS and the fire department — designed to prepare healthcare staff to better respond and recover in the event of a real-life emergency.

“Emergency exercises are a really good opportunity for us to take a look at our emergency-response plans, how we respond, and what we need to do better going forward,” says Breea Tamminga of Emergency Disaster Management (E/DM).

The idea for the exercise came from Riley Carroll, Facilities, Maintenance & Engineering (FM&E) site lead in Oyen, who’s also a volunteer firefighter. For the past six years, Carroll, who’s participated in a staged evacuation of the Oyen Seniors Lodge, saw value in applying the exercise to Big Country Hospital.

Carroll approached the Oyen fire chief and emergency services dispatch, who both agreed to partner with AHS for the event, and also met with Tamminga and Dianne Swantz, Big Country site manager.

“Everyone was on board,” says Michael Stanford, executive director, Capital Management, for South Zone. “Breea designed an exercise outline, and we devised a scenario that would prompt an entire building evacuation, along with goals and objectives.”

The ‘fire’ started in the communications room of the hospital, and it quickly gained traction. The individual who discovered the ‘fire’ pulled the fire alarm and called 911, where they were asked the same questions they would be in a real emergency.

Within seven minutes, the Oyen Fire Department arrived at the hospital to inspect the scene.

Upon arrival, the fire chief took control — much like they would in a real emergency — and made the call to ‘evacuate’ the building.

“Unified command between AHS staff and the fire chief helped ensure decisions were made quickly that took into account the site, the patients and residents, as well as the direction of the Fire Department,” says Tamminga.

The fire chief worked closely with the charge nurse and FM&E to search and evacuate the building as quickly, and as safely, as possible. To avoid impact to patients, AHS arranged for volunteers to act as patients instead. Once the simulated evacuation of the building was complete, and the ‘fire’ was extinguished, the fire chief allowed people back into the building.

More than 30 AHS staff from various departments took part. Everyone worked and communicated effectively with one another, with the simulated evacuation of the site happening within 10 minutes of the fire alarm being pulled.

Following a functional exercise such as this, the E/DM team creates an after-action report and improvement plan based on feedback from the event. “We discuss what our strengths were and what our areas for improvement are,” adds Tamminga.

These learnings will be used to better prepare the site and staff for a potential emergency and to improve emergency response plans, if needed.

“These types of exercises enable staff to practise responding in realistic scenarios,” says Tamminga. “The learning that comes from that practice is very effective and impactful.”