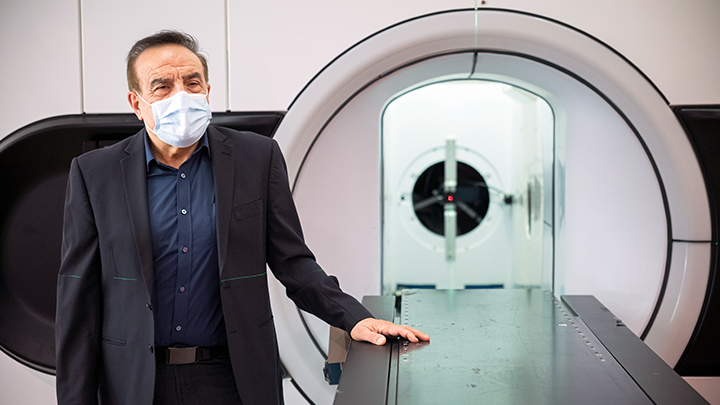 X-rays reveal dense matter in the body, such as broken bones and solid tumours. But X-rays of tumours in soft tissue, such as those in the lung, breast, or prostate, are often ill-defined and hazy.

Magnetic resonance imaging (MR) improves the ability to see cancer tumours clearly. After the target is identified, however, moving patients from an MR machine to a linear accelerator (Linac) for X-ray radiation treatment creates a new problem, as tumours in soft tissue often shift during movement.

Medical physicist Dr. Gino Fallone thought of combining the two technologies — MR and a Linac which delivers therapeutic radiation — to track and treat a tumour in real time. Radiation is capable of destroying cancer, while MR provides increased visibility.

The combination, however, was widely believed to be impossible. The opposing technologies could interact or compete, with dangerous effects.

The MR’s magnetic field impedes the creation of X-rays and in turn, the Linac affects the operation of the MR.

“The result? No effective radiation, no working image of the tumour,” he says.

Despite those challenges, the concept of a hybrid machine stayed with Dr. Fallone and, over the following years — with competitive grant support from the Alberta Cancer Foundation (ACF), Alberta Health Services (AHS), Alberta Innovates, and others — he led the Linac MR development at the Cross Cancer Institute (CCI) in Edmonton.

The Linac MR is currently undergoing clinical trials after being certified and licensed by the Canadian Nuclear Safety Commission in 2021 and 2022.

Trials will continue until the Linac is available as a standard of care, which the team hopes will occur within the next five years.

The Linac MR was commercialized as the Aurora-RT and, in May 2022, the U.S. Food and Drug Administration cleared it for sale in the U.S. Regulatory approval for sale in Canada is forthcoming.

Fallone says for all of its strengths as a hallmark treatment for cancer, radiation therapy historically posed one very specific challenge: “You have to know exactly where that radiation beam should go.”

“For 50 years, this was the holy grail of radiation therapy — to direct it to the exact, right spot. This is crucial in order to spare healthy tissue from the damaging effects of radiation.”

But any movement, and the tumour may shift. “Standing up, walking, even lying within the Linac machine, may cause the tumour to move, even slightly. It’s not exactly where it was a few moments ago,” adds Fallone. “Regular breathing will cause the lungs, stomach, liver and pancreas to move, repositioning the tumour. Even prostate tumours can shift slightly due to other processes.”

To accommodate a mobile tumour and minimize damage to surrounding healthy tissue, radiation doses are lowered, while widening the beam in each treatment session.

Fallone and his team began working on their idea to combine MR imaging and radiation and, by 2008, they had the world’s first working prototype, publishing their landmark paper in Medical Physics a year later.

Over the next several years, the development process continued, with a series of worldwide patents awarded to AHS. Refinements to the modular design allow it to be assembled and installed in an existing clinic, as well as rotate around patients of different sizes, and treat tumours in any location in the body.

“As researchers, we dream of new technology that has the potential to make a huge difference in treating cancer,” says radiation oncologist and University of Alberta professor Dr. Nawaid Usmani. He’s leading the clinical trials of the Linac MR, as part of a program entitled Northern LIGHTS. So far, 38 patients have been enrolled in the trials at the CCI, the only trial site at present.

“Not only will the hybrid design give us live MR imaging, allowing us to clearly see and treat more types of soft-tissue tumours, but we can confidently increase the radiation dose because the tumours are so much more visible.”

The new technology also offers better treatment and can be done in less time. “We can reduce the number of treatment sessions down to five, possibly, when as many as 39 sessions might have been necessary 15 years ago,” says Usmani. “For patients from Grande Prairie, or Yellowknife, who are being treated far from home, that is huge.”

One of Usmani’s patients, Len Friedenberg lives in rural Alberta, near Edmonton. In 2021, Usmani asked if Friedenberg would be interested in helping to test the new technology. “They weren’t using the image as a diagnostic tool. It was more about confirming that it worked the way it was supposed to,” Friedenberg says. “I’ve had MRIs and it wasn’t a whole lot different from my perspective as a patient.”

As an Albertan with a background in tech and imaging, though, he’s excited what the opportunity means for other Albertans. “It’s very interesting.”

David Dyer, executive director of the CCI, agrees. “To expand the use of radiotherapy to things we couldn’t treat this way years ago is wonderful. It’s a real tribute to the expertise here at AHS and the University of Alberta.”

For his scientific contributions, Fallone was knighted by the President and Prime Minister of Italy, his birthplace. In 2021, he was awarded the Gold Medal of the Canadian Organization of Medical Physicists, and inaugural Alberta Lifetime Contribution Award in Cancer Research.